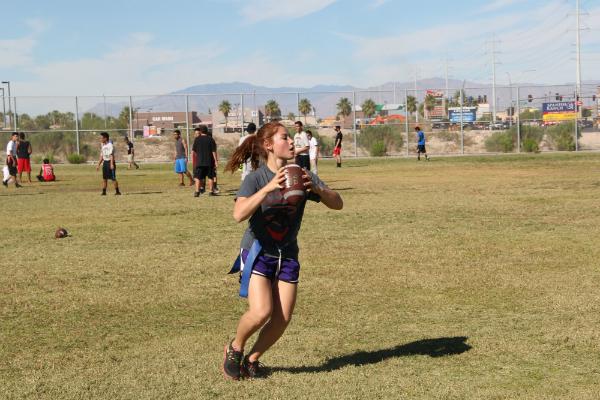 Students across both academies and genders have begun practicing for the 2015 Homecoming flag football game. Practices will be held from Oct. 9 to Oct. 15 and will last from 1:45 p.m to 3 p.m each day.

128 students attended Friday’s practice, with 15 more players expected to join on Monday. Beyond that, positions have been finalized and no additional players can be recruited.

“We’ve run a few plays and we’re working on catching and throwing. I feel like we’re going to win by a lot this year because we have a lot of good seniors and a pretty solid team,” senior Jensen Sassone said.

“We reflected on last year’s game and strengthened our weaknesses that we saw from last year. I am really confident because I’m making a bet with Mr. Morales and that motivates me to beat the DA girls this year,” senior Leanne Carambas said.

“PA boys won last year. Since I played on offense, this made me happy because I felt like I contributed a lot to our win,” senior Michael Medeiros said.