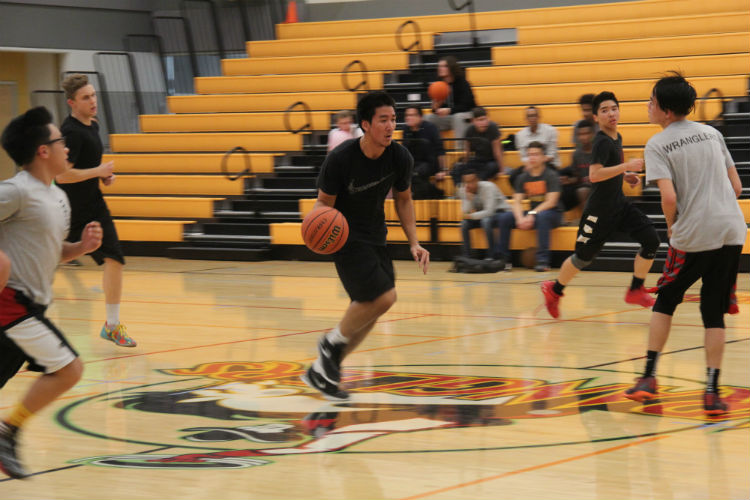 “I mean the game was fun overall,” senior Brian Lee said. “We weren’t doing so well in the beginning, but we played together and managed to play our way. West added some new guys to the team, so that’s something different. We weren’t worried, though. We were just trying to get our rhythm back.”

“I didn’t like having the 4 quarters instead of 2 halves because it gave the other team a chance to rest,” senior Stirling Ahlbrandt said. “Our team didn’t need the breaks because we were in better shape than the other team. In the long run, it didn’t affect anything because we still came out with the W.”

Currently in the process of organizing the bracket schedule, English instructor Mr. Albert Ocampo will announce who the Coyotes will play against in the next match.

“I felt that my teammates played well,” Lee said. “I wasn’t playing like myself in the first quarter, but after some yelling from Ocampo, I managed to get back in rhythm and played my game.”

Because CTAs do not have competitive sports, teachers from the academies are organizing a basketball league to compete against each other. In the opening game of the series, SWCTA defeated WCTA 62-28 on their home court.

“Well, we played horrible the first half,” senior Izeah Guiao said. “We were kind of weak, so we didn’t really play like ourselves at first. West had better movement than last game, but after we pulled ourselves together, it was a comfortable win. We didn’t really adapt to them. We just played our game; unselfish and moving the ball to everyone as a team.”

On Feb. 23, Ocampo and his lineup of seniors will play against a newly formed team composed of SWCTA underclassmen. More information on the team will be announced next week.

“I’m excited for the game versus the underclassmen,” senior Michael Medeiros said. “It gives us another game to play as a team, and also gives the student body another opportunity to show their school spirit.”