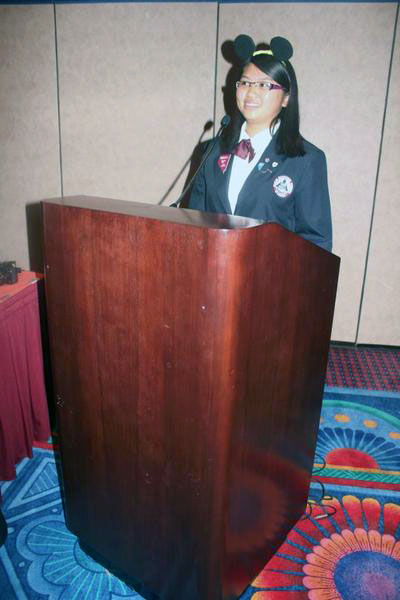 During NLC, senior Yuen Ying Ha made a few announcements during the Nevada state meeting to set the agenda for the upcoming day's training. Photo Credit: Bserat Ghebremicael

The awards received were for the national service project, outstanding HOSA chapter, two Barbara James service awards, and national HOSA week. After earning a spot in the top three during the State Leadership Conference in Nevada, all three students were able to compete at the national level. Wolf and Brigola competed in the Community Emergency Response Teams event, and Carrasco competed in Medical Photography.

“Being confident that you did well is great, but it doesn’t always mean you will win,” SWCTA HOSA President Wolf said.

Seniors Bserat Ghebremicael and Yuen Ying Ha also attended the conference as Nevada HOSA state officers. Their responsibilities ranged from managing the Nevada State Meeting to attending several important workshops, meetings, and practices. They also had a two-day training, where they came up with ideas with their team for the Program of Work, a layout of their goals for the year. During her time there, Ha also competed in Job Seeking Skills and placed in the top ten.

“I think NLC was great. There was a lot of energy because HOSA is growing bigger and bigger,” Ha said.