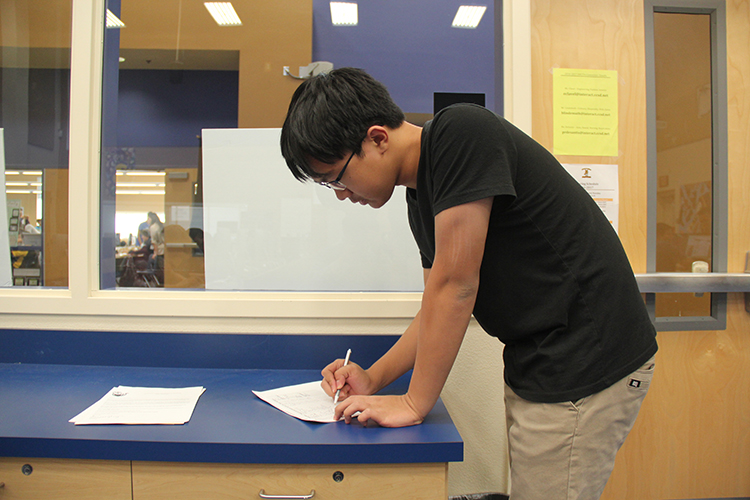 After tagging was reported in the boys bathroom last Wednesday, which is now cleaned up, a new policy was issued that requires students to sign in and out of class to use the restroom. School administration is now working with law enforcement to find the vandals responsible.

“We reported two instances of graffiti in the boys bathroom urinal last week,” Dean Sharrae Nelson said. “My speculation is that the vandals involved are freshmen because vandalism has never happened in the past two years I have been here. We are also unsure of the motives of the tagging; it could be gang related or even related to the tagging that has been found around Rainbow Boulevard and the electrical box in the student parking lot.”

The reason why teachers keep time logs is because the investigation requires a time frame of suspects, along with preventing further vandalism.

“I actually think it’s a good idea, not just to prevent tagging, but on the off chance that we do have an actual fire or a school emergency, it would be hard to keep the students safe if we don’t know where they all are,” Dental program leader Dr. Michael Georges said.

Previously, if a student needed to go to the bathroom, it was up to the teacher to create their own policy for allowing students to leave class.

“I don’t think having to sign in and out of class is a big deal; but I think we should get rid of it and go back to the previous way of exiting the classroom,” senior Andrew Yau said.

If the vandals are caught, they will have to face academic punishment as well as legal action for vandalizing school property.

“Their punishment depends on the law enforcement of the school police because it is vandalism to public property,” Dean James Cambell said. “It’s actually under Nevada Revised statutes, so depending on the severity and intent of the graffiti, the student may get RPC’d or suspended, we don’t know until we get this investigation going.”

The cause for vandalism is still unverified, but the motive will be a cofactor in the severity of the punishment.

“We don’t know why this is happening there but if this is a racial, gender or any kind of attack on a group, you might see an expulsion there because we do not accept this kind of [behavior],” Campbell said.