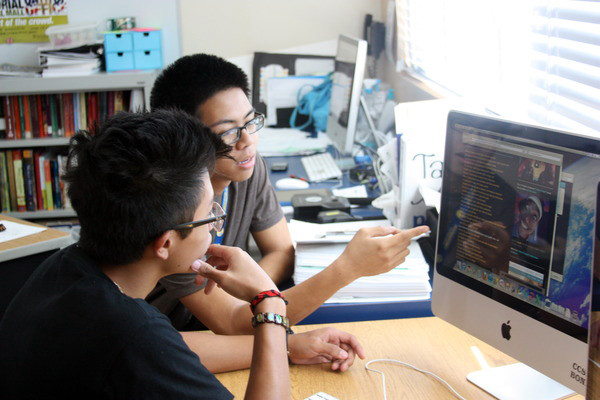 Juniors Nikko Alcaraz and Julian Pascual search for famous rap artists to brainstorm ideas for the upcoming talent show. "I want to show a lot more skill this year. I want to be remembered by others even when I graduate," said Alcaraz.

“We’re planning on doing our first talent show on November 2 of this year. Our talent show competition will be happening in February,” Talent Club advisor Ms. Krista Boivie said.

Last year more than 100 tickets were sold. Members of the talent club are planning to exceed there past performances by practicing every day.

“I practice singing almost every day. I don’t practice dancing that much anymore but I do practice once in awhile,” junior Nikko Alcaraz said.

“We’re trying to recruit more people this year so that the older members won’t be the only ones performing. We would like to get non-singer acts and attempt to broaden our performances with different acts,” Boivie said.