Teacher Royalty nominees selected Winners will be announced at assembly 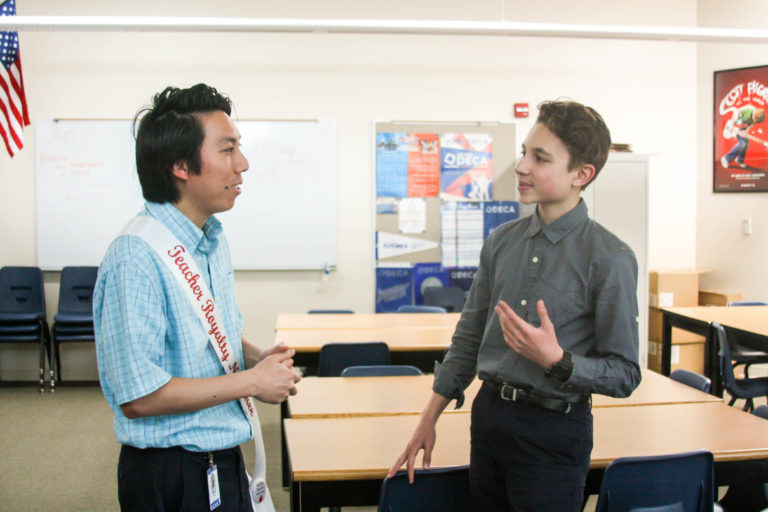 Bryce Wada and junior Victor Taksheyev discuss his nomination for Teacher Royalty. Wada was nominated for 'Most likely to be a jock during high school.' "The word 'jock' commonly has a negative connotation and I've heard that Mr. Wada has played sports in high school, so I wouldn't call him a jock," Taksheyev said. "He might be an athlete but he's also very nice, compassionate and intelligent person." Photo Credit: Jackie Romo

Last week, for only ten cents or a canned food item, Student Council accepted nominations for teacher royalty. During both lunches, boxes were set up and students could enter their nomination.

“I think that the categories were really funny this year,” junior Kevin Dang said. “The ‘Most likely to be a meme’ category was clever. I also thought that the teachers that were nominated were really funny too, like Mrs. Barnish for being a jock or Coach Bly for most un-athletic in high school.”

“For teacher royalty, we first looked at a couple of previous categories that we did in the last couple years and then we took those for consideration,” StuCo member Brianna Saldivar said. “We looked at which ones worked out and the ones that people voted for most. We also chose some that people would like– the meme one is new but a lot of people are into that these days so we decided to incorporate that.”

Once all the nominations were counted, the three teachers with the most votes were selected for each category and received a sash.

“I actually didn’t think I was going to be nominated because this is my first teacher nomination and my fourth year here,” AP Government teacher Mr. Joseph Julian said. “I was nominated for ‘Most likely to brighten someone’s day’ and that made me feel really good, because I try to go out of my way and put effort into being positive and make my class a welcoming environment. The fact that some students look at me as a positive presence in their life makes me feel really good.”

Teacher Royalty winners will be announced during the assembly this Friday. The last day to vote for your favorite teacher is Friday before noon. To vote, click here.

“Mr. Jayme was nominated for ‘Most likely to be a meme’ and I think he truly fits into that category,” sophomore Aubrianna Coddington said. “He’s a funny teacher that likes to add in his own remarks when he speaks. He’s always making the class laugh.”