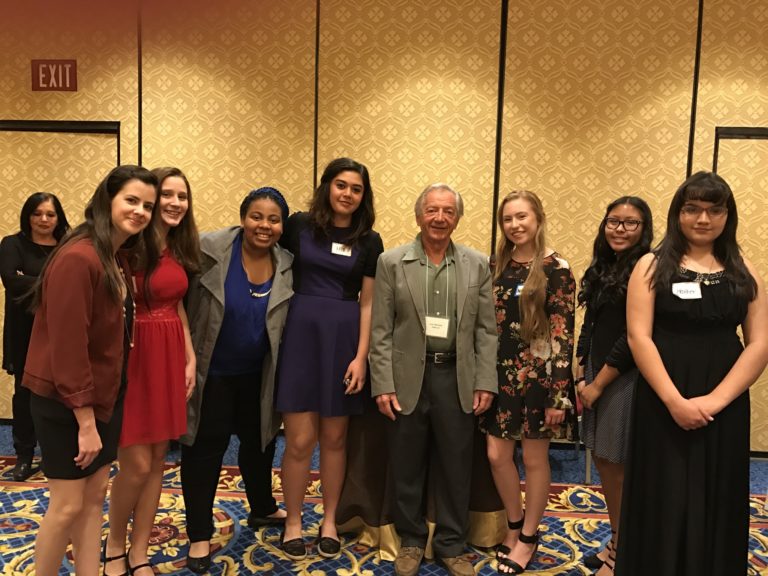 Standing together, sophomores Gabriela Hernandez, Katelyn MacMahon, Symphanie Tyler, Mia Buranamontri, Aubriana Coddington, Darian Tupasi and Heather Macias-Padron meet survivor Leon Malmed. The memorial dinner lasted for four hours, and students were able to have conversations with Holocaust survivors. "The most memorable experience of the night was the stories I heard–just hearing how they survived and what they saw," MacMahon said. Photo Credit: Ms. Cathy Sabol

On March 8, English teacher Ms. Cathy Sabol and seven of her students attended the Annual Student/Teacher Holocaust Education Conference at Sands Expo Center. The conference included a dinner which allowed middle and high school students to meet and talk with Holocaust survivors.

“They bring first or second generation survivors of the Holocaust to one evening where the students get to sit at a dinner table and have a conversation with them,” Sabol said. “Las Vegas has about 120 survivors living here.”

The event included speeches from survivors Ben Lesser and Leon Malmed, a presentation from Sheldon Adelson and a theater production from Del Sol Academy of the Performing Arts. Each table at the event had students, a teacher and one to two survivors.

“The most memorable experience I had at the event was definitely meeting Sveta,” sophomore Mia Buranamontri said. “She’s a Russian survivor who was very young when the Holocaust occurred. You’d never guess she went through such a horrible time as she was such a happy woman with a great sense of humor.”

Only seven students were able to attend, and interested students had to appeal to Sabol through presentations.

“Among many other students, I wrote a letter to Ms. Sabol explaining why I felt that I should be chosen to attend this amazing event,” sophomore Aubrianna Coddington said. “In the letter, I told her of my sincere admiration of Holocaust survivors. They are true heroes in my eyes.”

In order for Sabol to attend the event, she also had to go through an application and training process.

“[The organization] lets you know if you’re selected and you have to go to a two hour training before the dinner in February,” Sabol said. “It was mostly a look at Las Vegas’ survivor population; the number of survivors in Las Vegas has been cut in half over the past few years because they’re getting older. We were also reminded a little bit about questions that would cross the line between what’s appropriate to ask and what might bring up more memories.”

The event is sponsored by the Governor’s Advisory Council on Education Relating to the Holocaust and the Clark County School District. Both Sabol and her students enjoyed the experience and hope to attend again in the future.

“As Ben Lesser said, ‘When we choose love instead of hate, we help to prevent the horrors of the Holocaust from happening again,’” sophomore Darian Tupasi said. “His message on spreading love rather than hatred has really taught me that we must stop the hatred amongst each other, because hatred is something that only makes the world have a negative outlook.”