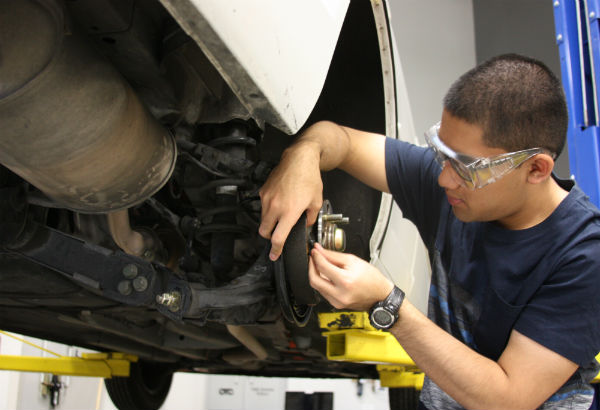 To broaden the awareness of career opportunities and refine automotive skills, Ford Motor Company and American Automobile Association (AAA) hosts the Ford AAA Auto Skills Contest, providing an environment for students to exercise their knowledge. The 10 highest scoring teams of two from Nevada’s online multiple choice qualifier will board an all expenses paid trip to compete in the state finals in Reno.

“I’m really excited to be able to advance with Jordan to Reno. Leading up to the competition, I plan on reviewing key automotive practices with Mr. Raha and students who have previously competed in the Ford/AAA contest,” Rodriguez said.

As the event’s sponsor, Ford offers vehicles from their newest lines for students to diagnose and repair. Vehicles are uniformly “defective,” requiring the competitors to fix the malfunctions in the fastest amount of time.

“I was a little nervous during the exam because there were some concepts that were unfamiliar to me. I’m more confident in my hands-on skills, so I think Kevin and I will perform well,” Kirtley said.

Despite the prohibition of previous contestants from re-qualifying, last year’s state qualifiers will train Kirtley and Rodriguez and share their experiences to physically and mentally prepare them.

“I competed last year for the Ford/AAA’s contest with Jedry Ednacot and received fourth overall in the state for that competition. Even getting that far in a competition is an amazing feeling, but then getting fourth for the school’s highest ranking is even better,” Automotive SkillsUSA President senior Brandon Saunders said. “It’s just a great feeling overall to not only know you’re one of the best for your age group in the state, but also to know that you’re representing the whole school hoping to get gold.”

Throughout the state and national finals, participants can collectively claim $12 million in prizes, awarded in the forms of scholarships, entry-level programs, equipment, degrees, internships and employment opportunities.

“I love to see students pick the automotive field as a career for them. It offers many challenges and opportunities for them. The industry has changed so much over the last 40 years,” Raha said.

The winning team from each state will travel to Dearborn, MI to compete in the national finals.

“I’m am very grateful to be able to qualify for Reno and represent SWCTA,” Rodriguez said.