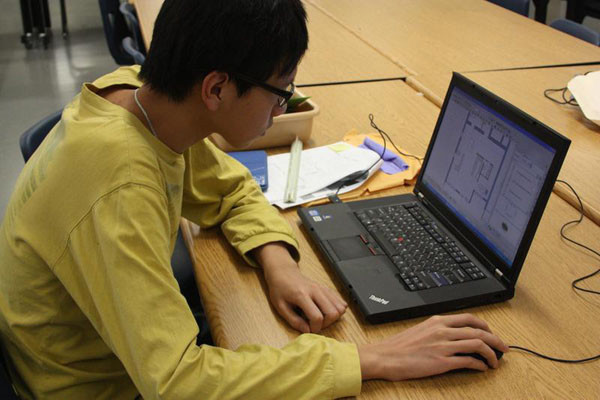 Senior William Zhang works on his Interior Design capstone that is due in May.
Photo Credit: Bree Eure

The finalists for the Gates Millennium Scholarship were announced Thursday. Seniors Bserat Ghebremicael and William Zheng have been selected.

“When I first got the letter in the mail saying I was a finalist of the Gates Millennium Scholarship, I realized that a great opportunity has just presented itself to me and I was ecstatic,” Zheng said.

“I’m excited about being a finalist, but I don’t want to jinx it,” Ghebremicael said.

Ghebremicael and Zheng were required to send in a transcript, a Student Aid Report to ensure they were eligible based on the financial requirements, write eight 1000 word essays, submit a resume, and receive a written nomination and recommendation from a teacher. All scholarship applications were due on Jan. 10.

“I recommend that all of my students apply for the Gates Millennium Scholarship because they may just be one of the thousand that get accepted,” Respiratory Therapy teacher Mrs. Vicki Smith said.

Selected finalists will attend an awards ceremony and become part of the Gates community sponsored by the scholarship providers Gill and Melinda Gates. In the middle of April, only 1000 students will be selected as scholars.

“I’m extremely interested in applying for the Gates Millennium Scholarship [next year]. It can help pay for my tuition throughout college,” junior Rayden Sisomphou said.