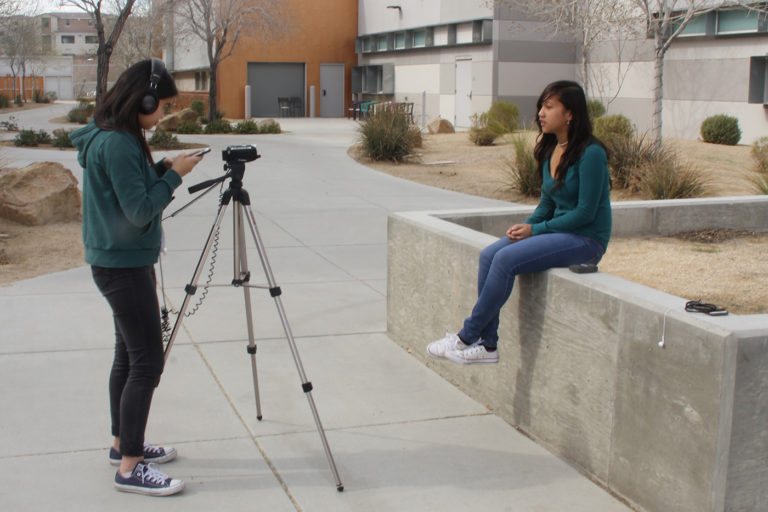 While sophomore Lacie Pichay watches the camera and reads her interview questions, freshman Angela Lorenzo makes up answers along the way. Before students could begin making commercials or public service announcements, they had to practice the basics of filming through previous assignments. “We were all assigned a fake topic to follow, and for ours, it’s about someone who just won the X-Factor,” Pichay said. Photo Credit: Cassie Valdez

“If their commercials are good enough, they may be put on the show, which the school watches every day,” Rizzo said.

Students can work individually, in pairs or in a group of three. If they get lost, they can refer back to the online web lesson on Rizzo’s website.

“First, we have to come up with a commercial idea,” sophomore Braden Sumabat said. “Then, we have to present our idea to Mr. Rizzo. After that, we start to record and edit our film. All in all, it takes about three days just to make one commercial.”

Although students are encouraged to express their creativity, stories must be relevant to the student body. Rizzo has provided commercials from previous years for students to gain inspiration from.

INFOGRAPHIC: Health Myths Learn more about the myths spread around for years

Videos are expected to include proper sound levels, rule of thirds, a variety of shots and more. Afterwards, Rizzo will critique how well students used different techniques. Then, students will revise their video based on the feedback given.

“[To any Video Production I student,] I’d say don’t give up on a commercial and let your creativity out,” junior Simon d’Elia said. “I’ve been trying to do the same commercial for three years, but it hasn’t been good enough to air. I’m finally getting to complete it this year hopefully.”