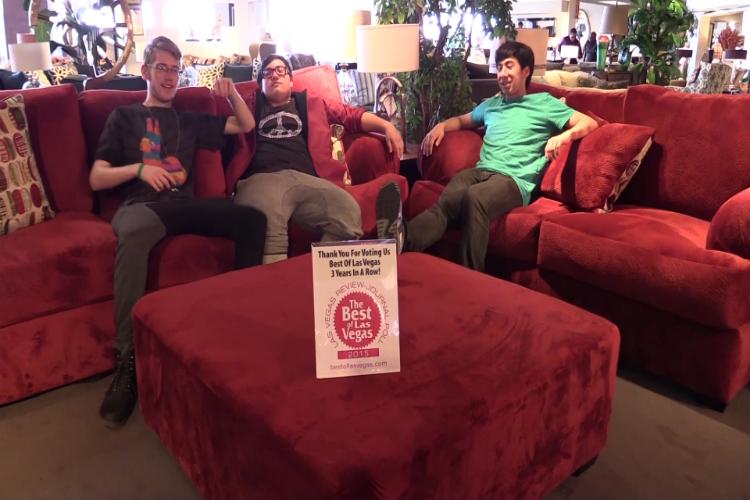 To stimulate sales of furniture to the public, Walker Furniture encouraged Clark County School District and College of Southern Nevada students to create commercials promoting their products. After reviewing the submissions through the week of Nov. 2, the judging committee announced seniors Jaden Bailey, Ari Rojas and Nate O’Gane as the winners of the competition.

“Last spring, along with Ari Rojas and Jake Tolbert, I participated in a PSA contest for raising awareness of texting and driving,” Bailey said. “Next thing I know we won $1000 from COX and had our commercial aired on local television. Family members and Mr. Rizzo talked about an upcoming Walker Furniture contest. I was happy to see the topic was simply to create just a commercial, rather than having some kind of specific theme to it.”

Walker Furniture management welcomed students into their store to film a television spot, allowing them to create the 30 second commercial that combines elements of humor, wit and creativity.

“It took a day to film everything at Walker Furniture, and it took about 2 days to edit the actual commercial,” Bailey said. “The hardest part was trying to properly burn the commercial onto a DVD, which embarrassingly took 3 discs to accomplish.”

On Oct. 20, they began by planning out the commercial and proceeded to record the following day. To submit their entries, CCSD students had to deliver their commercials to the School-Community Partnership Office by Oct. 29.

“I wanted to do it but didn’t actually take any action until the week before it was due,” Bailey said. “All I knew is that I wanted Ari Rojas and Nate O’Gane to work with me, and I wanted to create something that would be fun to shoot and edit. Our original idea ended up being a little too complicated, so I thought of something simple and fun.”

In addition to broadcasting their commercial on local television in the upcoming weeks, Bailey and his group will receive $300 to divide among themselves, and Walker Furniture will provide their teacher, Mr. Tom Rizzo, with a $150 gift card to their stores.

“I am pleased that Jaden’s had a chance to show off his skills because he’s more of a filmmaker than a journalist, and this is a good chance for him to get some public exposure for what he’s done,” Rizzo said.