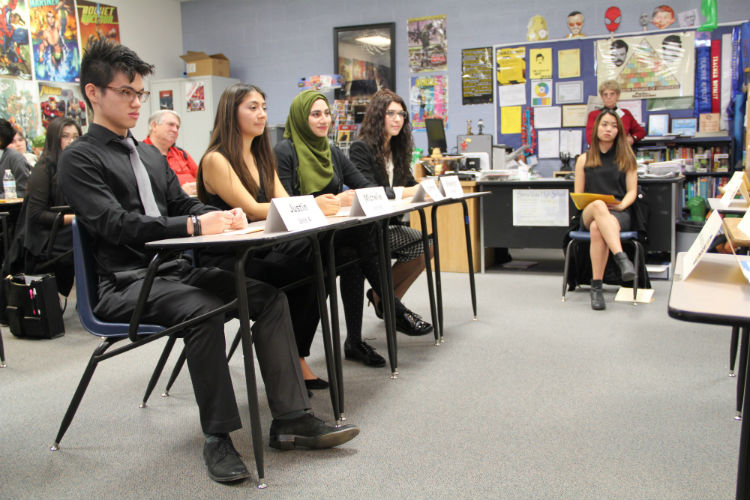 Students in Mr. Joseph Juliano’s Advanced Placement (AP) U.S. Government class attended the “We the People” competition sponsored by the State Bar of Nevada held at Sierra Vista High School on Dec. 12. The team won second in the district and three out of the six placed first in their respective unit.

“This is the first year that Southwest has competed in this competition and it’s also the first time we are going to state,” Juliano said. “I’m really proud because it’s rare for a school in their first year to make it to state. The goal is to make it to top three at state.”

The top three schools at the competition were WCTA, SWCTA and Bishop Gorman High School. Students will begin drafting their final speeches over winter break and will be utilizing class time in Jan. to prepare for the hearings.

“The competition is going to be set up the same way, but the students are going to have to talk for a longer amount of time and show more information,” Juliano said. “We don’t have the the exact rules, but they are going to have to present two four minute speeches and then do 12 minutes of cross examination.”

The first place winner at state competition will be attending nationals in Washington D.C. and will be competing against the rest of the country.

“I’m ready to redeem myself at state and create a good reputation for Southwest since we are the first competitors from our school and hopefully we’ll make it to nationals in Washington D.C.,” senior Marissa Villarosa said.

The finalists will be competing against 11 different teams at the state competition. The event will be held at WCTA on Feb. 6.

“The ‘We the People’ competition was the best academic experience I’ve ever had in high school,” senior Leslie Tran said. “I’m so glad I got the opportunity to participate in this event because not only was it a great learning experience but we also got to taste sweet victory.”