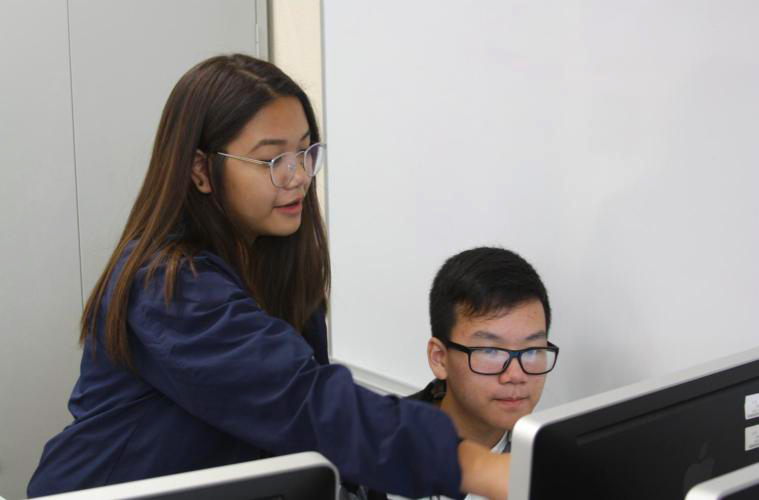 Editor-in-Chief Russel Valdez assists junior Zhen Yu on a yearbook spread. Valdez has been the Editor-in-Chief of the Howl yearbook since last year. “My staff last year was quite small compared to now, it is amazing being able to have the extra hands to ensure that the yearbook is running smoothly,” Valdez said. Photo Credit: Cosette Zielinski

Aiming to deepen the theme’s meaning, the Howl yearbook staff changed the theme from “It Means Something” to “2nd Story.” The “2nd Story” theme focuses on hidden stories that aren’t always told or seen in the public eye. It promotes different perspectives of the same event or experience.

“The first theme really wasn’t working with what we wanted and it didn’t go along with the visuals we wanted, so when we presented ‘2nd Story,’ it allowed for more flexibility in coverage and design,” Editor-in-Chief  Russel Valdez said.

Because the yearbook staff had been working with the theme “It Means Something” since the end of last school year, the change brought adjustment complications.

“[The change] was pretty stressful because, afterwards, we pretty much had to start from scratch,” senior Justine Ho said. “All the ideas we had for ‘It Means Something’ were mostly put to the side.”

Several aspects of the upcoming yearbook will be different than last year. Inspired by magazines, the Howl staff plans to include foldout spreads. Also, due to the CCSD calendar changes, yearbooks will be distributed earlier in the year rather than late May.

“Personally, I really like the new theme,” Valdez said. “We haven’t done anything like it in the past, we’ve always just been focused on the main story so it’ll be nice to be able to cover the loser of the football game or the hidden talents our peers don’t know about each other.”

Yearbooks are currently on sale now for $90; prices will increase in September. Students can either participate in the $10 a month payment plan or pay in full at the banker, online or with any Journalism II student. To receive reminders for the payment plan, text @thehowl18 to 81010.

“Not only have I bought a yearbook every year that I’ve been in school, but I buy the yearbook to record my major success of the year,” junior Samuel Phan Le said.