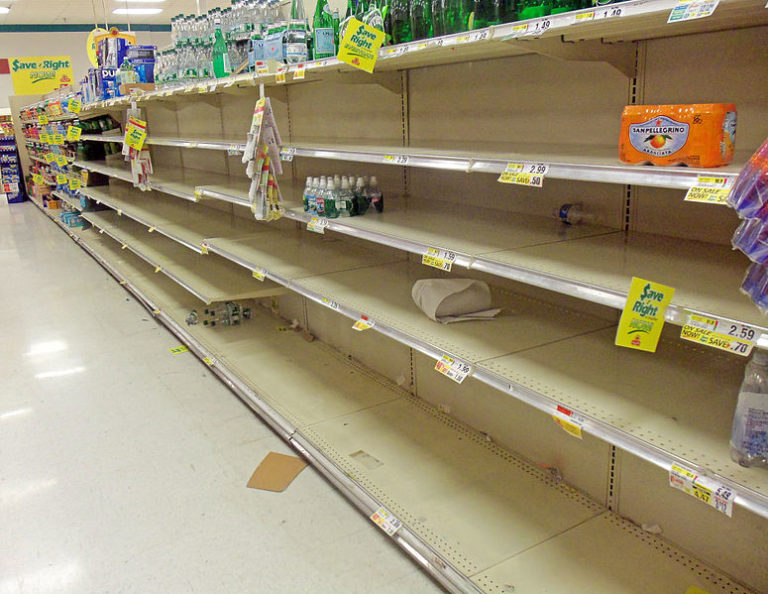 Photo of a Shoprite with partially unstocked shelves, due to lack of new imports yet. Photo Credit: Wikipedia

One of the biggest topics in relation to the Joe Biden presidency is currently the idea that soon the United States will have major supply shortages. It is a fact that there are disruptions in the transportation of goods referred to as the supply chain, with a noticeable shortage of certain goods nationally. However, will there be a major crisis on the horizon?

According to the USDA, as it stands there will likely not be a crisis; there will however be some shortages. These ongoing shortages are a result of demand outpacing supply, primarily due to the COVID-19 measures taken during the pandemic. Specifically, measures that limited commerce like lockdowns.

Secretary of Transportation Pete Buttigieg attributes the current supply shortages to a surge in demand,”Demand is up,” Buttigieg said, “because income is up, because the president has successfully guided this economy out of the teeth of a terrifying recession.”

As it stands currently the US government’s economy is struggling to return to pre-pandemic levels, and until America fully recovers our commerce will be crawling back to a point of stability.

Others do fear however that the factors that are causing these shortages will eventually spiral out of control. Many worry in particular, that the labor shortages will lead to many vacant positions, further straining the supply chain, as fewer people will be working in certain important industrial sectors.

Further straining transport the U.S. postal service has made many cutbacks on its transports, including reducing postage delivered by air significantly. This is in some cases increasing the time taken to deliver first-class mail by three or four days.

While these bottlenecks in the supply chain are supposed to be temporary, there are many who fear the USDA’s observation is incorrect, and that a crisis will be coming. This has led to hoarding once again, which is only further contributing to the idea that the U.S. will run out of basic necessities.

What the U.S. needs is time, as observed in the previously mentioned in the USDA’s report, time will eventually normalize the U.S. economy. However, in the short term companies and local governments have been purchasing more goods from other sources to try and offset this current shortage.

The U.S. is currently in a tight spot, and this supply-chain issue is a contentious topic asking how bad it will truly be. However, as it currently stands it would seem that the economy will slowly crawl back to fully operational, though it wouldn’t hurt to take a cautious optimism to the issue of supplies.