EDITORIAL: Can’t fight fire with more fire Arming teachers is not the answer 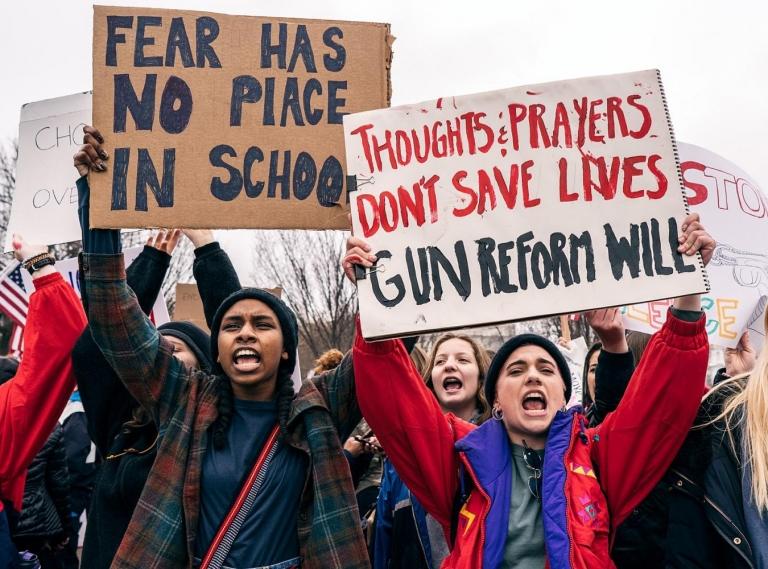 In the wake of the shooting at Marjory Stoneman Douglas High School in Florida, the organization Teens For Gun Reform protest in Washington, D.C. Photo credit: Lorie Shaull

As the fire alarm blares throughout the room, teacher Melissa Falkowski yells down the hallway for students to take cover in a classroom closest to them. Hearing sirens and helicopters coming from outside, Falkowski knows this isn’t just another drill, so she shuffles 19 students into her closet where they hide until the SWAT team arrives.

Another gunman and another tragedy, Falkowski and her students are victims of yet another mass shooting. While the public attempts to come to terms with the events at Marjory Stoneman Douglas High School, solutions of how to prevent future shootings have come into question. Of the most controversial suggestions is providing teachers with guns as added protection in schools. President Donald Trump tweets: “If a potential ‘sicko shooter’ knows that a school has a large number of very weapons talented teachers (and others) who will be instantly shooting, the sicko will NEVER attack that school.”

While many argue that armed educators means an opportunity to fight back in times of danger, we believe that the concept is counterintuitive. Adding more guns to the equation won’t stop gun violence; it would only increase the problem at hand. More focus needs to be set on the availability and easy access to guns–instead of forcing weapons into a system that’s meant to be safe.

By arming educators, the trust between students and teachers is at risk of being compromised. Several students from across the nation have already voiced their opinions, stating that guns won’t make them feel safer. Not only that, but according to a Gallup poll, 73 percent of teachers oppose allowing school employees to carry guns on campus. If educators themselves aren’t enthusiastic about the proposal, how will they proceed to effectively live up to such a responsibility?

Currently, there are already a number of states that allow teachers to be armed. However, the plan isn’t foolproof; accidents with guns have previously led to students being put in more danger than safety. In Georgia, a teacher at Dalton High School allegedly fired a gun in his classroom and then barricaded himself inside, causing a school-wide lockdown and evacuation. In California, a teacher, who was formerly a reserve officer and trained in using firearms, accidentally fired a loaded gun into the ceiling.

Additionally, Falkowski claimed that legally armed teachers with proper training wouldn’t have made a difference in the Parkland shooting: “[The shooter] was wearing full-body armor and a reinforced helmet from what I understand, so you’re asking a teacher to bring a handgun, which is what most concealed carry is talking about, to face off against someone using an AR-15. I think that’s just unrealistic and not a fair fight….We shouldn’t be treating our schools like its a military installment [or] like our teachers are police officers.”

Even so, regardless of whether arming teachers “can be done right,” providing them with firearms and the proper training will be expensive. The Department of Education estimates that there are about 3.6 million teachers in the country—even arming only 20 percent of them, like President Trump proposed, would add up to millions of dollars, which school districts like CCSD don’t have the funds to pay for. As seen with #ArmMeWith on social media, many educators have stated that they would rather have those funds be invested in supplies to aid their teaching.

We have the chance to make change. It is time that we say enough is enough. Arming teachers is not a solution. We need funding and resources to better help students who are experiencing mental health crises. We need smaller class sizes to better know our students and their families. And we need laws to help prevent weapons from being easily accessible to all. Join the movement, #armmewith and take a stand against gun violence and mass murder in our schools. #enoughisenough #resist #guncontrol #standup #notonemore #gunsafety #mentalhealth #love #educatorsagainstgunviolence

Although CCSD is still working on a policy that would determine whether or not teachers can be permitted to carry firearms on campus, there is a state law that allows the head of public schools, colleges and daycares power to authorize bringing such weapons. However, the district has not acted on the law for good reasons that include liability concerns and union disapproval.

Arming educators may sound good in theory, but realistically, it’s more of a burden. In order to keep the campus safe, our best bet is to leave that responsibility up to law enforcement and security services. Protection is their main focus, and it is what they are properly trained for. A teacher’s main focus should be to educate their students the best that they can.

Instead of dancing around the core issue of poorly regulated firearms, the government at whole needs to face the gun issue head on and promote learning environments as a place for students to feel comfortable. Teachers shouldn’t have to worry about tactics to defend their classrooms but rather tactics to improve the quality of their lessons.