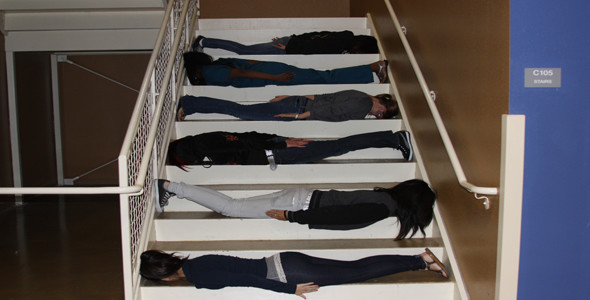 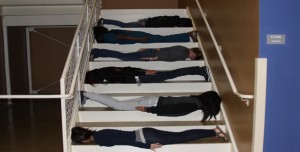 Planking is a trend that has spread across the Internet like wild fire. It’s supposed to be a practice where people lay face down, like a plank, in bizarre places. At first, the craze gave me a few giggles, but over time, I realized that all things related to planking are pointless.

This trend first started on the World Wide Web as the “laying-down game.” The object of the game was for someone to lay down on random areas, such as escalators, stairs, or table tops, until somebody noticed them by sight, or by possibly stepping on them. The trend has grown into something called planking. Now, people take videos or pictures lying in the plank position and post them on the Internet.

It’s hard to find the amusement in a photo or a video of someone lying down in a random area. People plank in public areas such as stairs, escalators, and floors. The only thing funny about planking is the low level of intelligence on display. I do not think they will find it amusing after they expose themselves to the disgusting bacteria that can be found on the floor.

Not only is it obnoxious to see planking saturating almost every social network, like Facebook and Twitter, but it’s also a public disturbance. It’s very inconsiderate to lay down in a crowded area while people are busy doing important things. Not only is planking a nuisance, it is also dangerous.

For example,  I was on my way to work and this crowd of kids decided to plank in the middle of the crosswalk! If I did not spot the kid, I could have run them over with my car and it would have cost them their life. Planking is not worth risking death.

Surprisingly, this frivolous act has been accused of also having racial overtones by some individuals, like rapper Xzibit. He suggested that planking has a negative connection to practices used in the transportation of slaves. When they were transported from Africa to North America, their sleeping areas were so compact that slave traders would force the slaves to lay in the plank position. It was impossible for them to move around, let alone sit up because the next row of beds were centimeters above them.

To bring this trend into the discussion of racism, is similar to saying racism and planking have the same value. Putting these two topics together is like trying to mix water and oil; they will never mix because they are two completely different subjects.

The intention of planking was not meant to be harmful or offensive; the individuals who created this practice probably weren’t smart enough to make that connection. If something like planking enters the racism discussion, it takes away from the much larger and important issue. People should work against intentional segregation and other harmful racist acts that continue to happen daily and not have it interrupted by something as juvenile a practice as planking.

There are many more things to do other than planking. Instead of planking, people need to start being more productive by finishing a project that’s due tomorrow or volunteering at a homeless shelter. Being with family and friends is also a better way to spend time.

Although planking has inserted itself into a culture as a supposedly hilarious trend, it will always be pointless and immature. Internet users need to stop admiring planking and start paying close attention to what’s really important. A pointless practice should not be given the spotlight.