EDITORIAL: Combating RFRAs and their right to discriminate 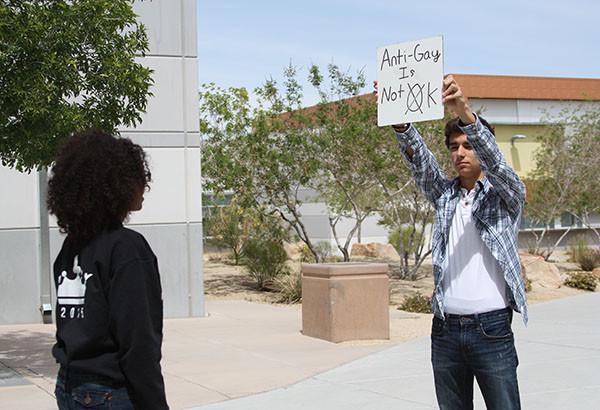 “Angie’s List is open to all and discriminates against none, and we are hugely disappointed in what this bill represents.”

Angie’s List CEO Bill Oesterle had this to say about Indiana’s recent law allowing business owners to refuse service to anyone on their premises because of religious reasons, with many deeming the legislature a “right to discriminate.”

Many other states, including Nevada, have tried to establish similar religious freedom acts allowing business owners the ability to reserve the right to refuse service to anyone who might go against their religion or personal beliefs. Luckily, the bill has been declared “dead” by legislation, due to the controversy surrounding Indiana’s bill.

However, considering that 21 other states have forms of Religious Freedom Restoration Acts  (RFRAs) and are ducking under the national radar, one has to wonder if Nevada will choose to pass this legislation at a later date, when all the buzz has died down.

We believe that this act, effectively condoning the act of discrimination, should never be passed, even if there is no controversy around the topic.

The primary reason RFRAs should not accepted is because they are a way to lawfully discriminate against certain types of people. No individual should be refused entry into a store because their orientation or race is outside of the owner’s sense of “right.”

While the legislature may discriminate against many types of people, age does not fall into that sphere. Grown, married adults are not the only ones who have to worry about which businesses will kick them out; school-aged children and teens can also be refused service if the owner finds fault with them, even if he/she has no evidence and simply acts on suspicion.

Another reason is because Nevada is classified as a tourist state. Most people who visit come for the casinos, attractions and shows, and people from all walks of life should be allowed to enjoy themselves inside the hundreds of casinos and stores dotting the Strip.

If Nevada adopted any form of an RFRA, lawmakers should not be surprised when revenue drops due to people being refused entry to a store, or because a group is boycotting that business due to the owner’s blatant discrimination.

[vision_pullquote style=”1″ align=””] That’s the reason the act has such a negative media portrayal: the whole idea is not progressive, but completely backwards. [/vision_pullquote]

One such example comes from Colorado, (a state that has proposed, but not enacted, RFRA legislature) when a bakery store owner refused to sell a gay couple a wedding cake, citing his religious beliefs as a reason. However, the owner was found guilty of discrimination by a court of law, which may not have happened if any religious freedom legislation was passed.

In no way, shape or form can an RFRA come out in a positive light in most modern day societies, where the majority of people are forward-thinking and against discrimination. Perhaps if the law came into fruition before the 1980’s, when popular opinion about gay marriage and interracial marriage was portrayed negatively, then businesses today would be able to openly discriminate.

That’s the reason the act has such a negative media portrayal: the whole idea is not progressive, but completely backwards. As referenced before, approval of LGBT/interracial marriage is at an all time high, meaning that the vast majority of people will not approve of the bills being proposed.

As the legislation currently stands, Nevada has made the correct decision of completely dropping the bill (to the chagrin of bill sponsors John Ellison and Joseph Hardy). Boycotts have been avoided, the tourism industry is intact and business continues just like normal, simply because of declining a ridiculous bill.

Hopefully, Nevadan state representatives do not have have any second thoughts about bringing this act back from the dead, as doing so would open up a new storm of controversy that could rival the mess in Indiana.

EMAIL your state politicians and express your opinion on the matter: