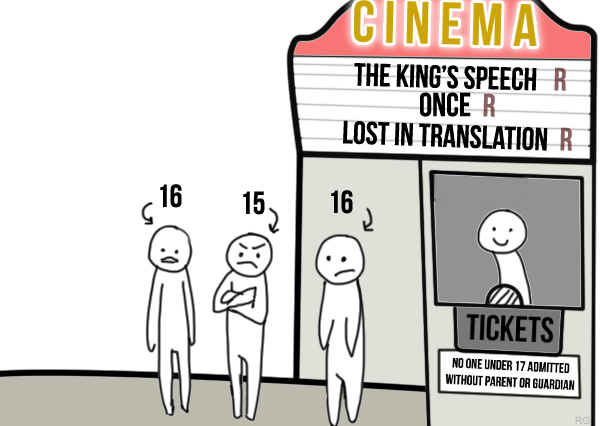 “How is it possible that these movies that torture women in a sexual context can have an R rating, but a husband and wife making love is inappropriate [NC-17 rating]?” actor Ryan Gosling said.

Even he can see the faults that lie within the Motion Picture Association of America’s (MPAA) movie rating system representing the six major Hollywood studios, including Walt Disney Studios, Sony Pictures Entertainment, Paramount Pictures, 20th Century Fox, Universal Studios, and Warner Bros. As more and more movies are being spit out with unreasonable ratings slapped on them, we begin to wonder if these guides are still credible and reliable.

According to the Classification and Rating Administration, in 2012, 56.36 percent of movies reviewed by the MPAA were rated R. That is 420 out of 745 movies total. But, some movies have been given ratings that call for more precaution than what they deserve.

Movies like The King’s Speech, Once, and Lost in Translation fall under this description. For example, the movie, The King’s Speech was given an R-rating even though the only content earning it that rating is use of language in only one scene, in which as a part of his journey to overcome his stuttering condition, the main character experiments with swear words.

[vision_pullquote style=”1″ align=””] With the other struggles families face nowadays, there is simply no time for that, and the only analyzing we want to do is on our favorite movies with our friends and family. [/vision_pullquote]

One major issue that we see in the MPAA’s movie rating system is that there are no solid guidelines. For instance, one of the statements for the R rating is, “…contains some adult material. An R-rated motion picture may include adult themes, adult activity, hard language…” Words like “some” and “may” are present in this statement and the ratings. If the MPAA can’t establish concrete boundaries, then how can we be certain about what we should and shouldn’t watch if we are not of age?

The nebulousness of these ratings allow parents to formulate their own standards according to what they feel is right for themselves and their children. However, many families do not have the time to sit down at the dining table and analyze each and every rating, from G, PG, PG-13,  R, to NC-17. With the other struggles families face nowadays, there is simply no time for that, and the only analyzing we want to do is on our favorite movies with our friends and family.

Extending from the issue about the lack of definition in the ratings, some terms used in the descriptions need to be explained for clarification. Phrases such as “adult themes” and “adult activity” can be interpreted differently. These vague and loose terms do not make it easier when choosing an age-appropriate movie. Although ratings may be labels, they are able to determine the age group they coax and repel.

In comparison to Europe, our rating system is more sensitive to harsh language and scenes that would be considered bothersome to audiences. However, in Europe, the BBFC considers several different age groups, each with a clear and detailed explanation of what might be found. A movie that may be rated “R” in the United States, could actually have a different rating in the United Kingdom. For example, while Lost in Translation and Once are given an R rating in the US, their rating in the UK is a UK:15, meaning that it’s suitable for people 15 years of age and older. As for The King’s Speech, the rating is a UK:12.

Consider that R and NC-17 ratings have the tendency to fend off younger audiences. According to CNN, in the movie “Bully,” a film portraying the life of a heavily bullied child, inappropriate language, such as the usage of the f-word, was present six times. Oddly enough, “six” was the magic number, a summoner of the infamous R-rating. Katy Butler, 17, started a petition that grew from zero signatures to 200,000. Her message was to lower the documentary’s film rating from R to PG-13. The director of the movie, Lee Hirsch, felt that the impact the movie was originally supposed to bring is lessened when the profanity is censored, an act that would give the movie its deserved PG-13 rating. However, we know that the profanity is what shows the genuineness of the situation, the grueling moment where a child suffers from words alone.

Simply acting as a guideline, the MPAA’s movie rating system is more like a tool instead of a restraining factor. As a combination of letters and numbers in a box in the corner of a movie poster, movie ratings do not deliver the solid structure that viewers need in order to determine which movies are ideal for them.

Perhaps the time has come for the MPAA PG-13 rating guidelines to slightly shift to allow more room for language, as it seems to be the biggest reason for otherwise harmless PG-13 rating deserving films to earn an R rating. Additionally, in order to better the movie rating system and make its standards more concrete, words like “may,” “could,” “would,” etc. should be eliminated, and replaced with words such as “will” and “does,” providing a clear understanding of exactly what the viewer is in for when they choose to watch an R rated film.

Giving specific and detailed information regarding material considered inappropriate or profane for some audiences is most helpful whilst deciding whether or not to watch a movie (with the family or on one’s own). In favor of anyone who may have missed out on watching their possible new favorite movie because of a rating, we suggest the MPAA reconsiders their rating system.