Telling the truth: what is integrity? 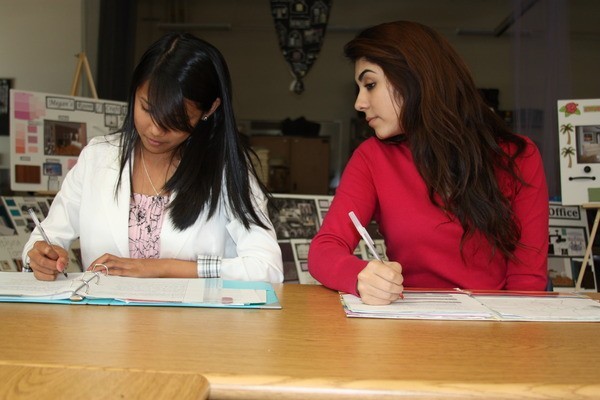 Cheating comes in all forms, but is prevalent in classrooms where students can copy answers from one another.

Throughout elementary school, I, as well as many other children, learned about integrity and what it means to be honest. I believe integrity is more than just that. Sure, you need to be truthful, but it is almost important to be respectful to those around you.

Cheating- what does this actually consist of? Is it when you sneak-a-peek at your friend’s paper? Is it when you write the answers on the palm of your hand? Yes, cheating does involve both of these, but does it still count if the person allows you to do so?

Cheating is, sadly, a common practice nowadays. Students will discuss amongst one another, quietly of course, the answers and what the others answered between class periods and sometimes even during the test. None of this is appropriate. Knowledge refers to our own mind and what we do with it, not what others “think” the answer might be.

I remember back in middle school, I was taking a test, nothing difficult, on the basic content of the given subject. An “acquaintance” of mine simply said, “I’m going to sit by you since you read the material.” I did not know what to do in that moment. I was not going to call out her wrongdoing then and there; I simply let it go. During the test, my friend said she wrote exactly what I wrote, word for word. One answer was completely wrong and I knew that. She, of course, wrote the same answer as I did.

I had an issue with this. For some reason, it bothered me so much. It was weighing down my conscious to the point that I was completely stressing out about it. I did not want to be in trouble because of another person’s lack of respect for my hard work. I deserved my score; she did not. I had never “tattle-taled” on anyone either. I did not want to deal with the consequences that were not meant to be mine, but I also do not want to be in trouble for another person’s wrongdoing.

I worked up the courage to tell my teacher about the problem. I believe this a form of honesty in itself. Having the courage to do what is right for yourself is just as important as doing something for the good of others. A person deserves as much as they earn. In the end, I think I did the right thing. After talking with my teacher, as young as I was, I felt relief. I only worried about what would happen with my friend, if she would be confronted and punished. In the end, I never heard another word of the situation. All was well.

Cheating is a debatable subject because there are so many different forms of it. Stealing answers, plagorism, having a “cheat sheet” are all a type of cheating and none of them are worth risking your dignity for. Not only are you dishonest to those around you; you are dishonest to yourself. By cheating you are setting yourself up for this lifestyle to be continued later in life. It is better to start being a good samaritan now rather than later.