The crushing weight of advertisements 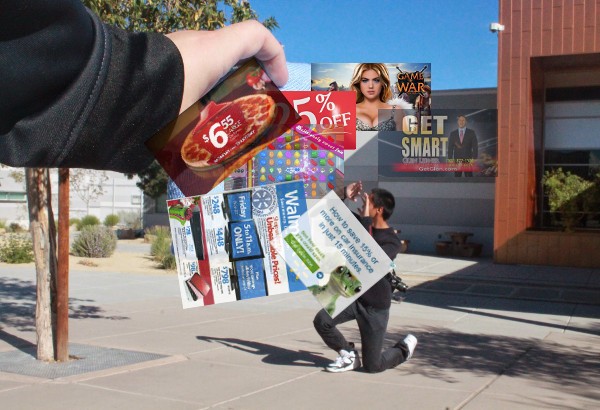 Advertisements; and a lot of them.

Switch on any television channel or flip through any radio station and, chances are, advertisements will be filling the air space. We’ve grown so accustomed to them that no one minds anymore if their favorite television show is interrupted by an ad, or if every fifteen seconds of football gametime is followed by a few minutes of advertisements.

The problem with ads is not that they are so frequent; the problem is that we, as a society, do not mind them anymore. Closing down a pop up or sliding away an ad is as common as eating breakfast in the morning (and some people tend to do the former much more than the latter).

Indeed, commercials have been so ingrained into American culture that no one seems to mind that the nation’s most popular sport, football, only contains about eleven minutes of gametime during the three hour and twelve minute broadcast period. Not surprisingly, commercials take up about an hour of the actual game.

Nevertheless, more than one third of the population (114 million, to be exact) tuned in to watch the Super Bowl this year, spending more than an hour viewing the over-the-top advertisements designed specifically for the big game.

Sports are not the only pastime that ads continuously dominate. Games, especially applications found on smartphones, shove advertisements down the consumers throat as soon as they download the free version of the app.

On one hand, the app developer is just trying to make an extra buck by filling up his/her application with advertisements since the app itself is free. However, filling a game or even a user friendly widget with banners, pop-ups and videos take away from the app’s appeal.

For example, my favorite game on the app store (Puzzle and Dragons) features absolutely no advertisements at all, allowing for a nice little time-waster when necessary. The company that produces the game is doing fantastic financially with the use of microtransactions in place of ads, something that other games that dominate the market seem to ignore.

There’s no question that consumers would rather a product be void of advertisements, but sadly that is almost never a guarantee. Companies know that they can milk ad-space for every penny, and know that their customers have become so accustomed to ads that they will not give up using their product simply because of a banner there and a video here.

Society as a whole will probably never be able to rid itself of rampant advertising, but if enough people took baby steps towards limiting the problem changes could be seen.

Throwing away the cable subscription and subscribing to ad-free streaming services is a good start, or uninstalling applications that are swimming in ad-space could be another.

One ripple in the pond may not cause much of a stir in the world of big business, but remember; every action has a reaction, and one may never know if they could have made a difference if they never take a chance to begin with.