Time is on your side 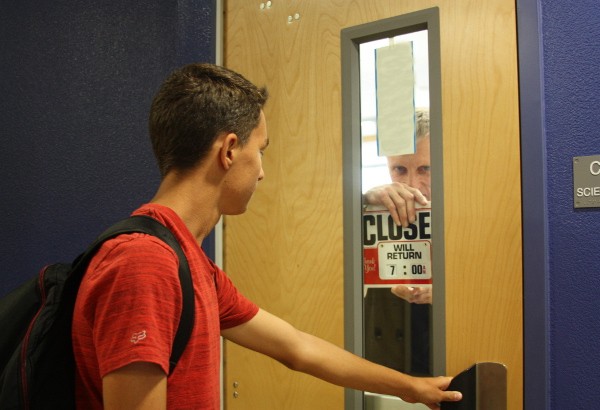 Even with a relaxed tardy policy, showing up late to class is still not accepted by any teacher.

Late. Again. Running five minutes late last year would have already brought down half an hour of after school detention on yourself, yet this year, a new tardy policy has been adopted by the school. Compared to the policies of previous years, this new take on tardiness is one step above.

In previous years, the tardy policy was strict on punishing students for their time negligence. In light of a new school year, the administration decided to make a change regarding individuals who show up late for class. Warnings by the means of parent contact are issued for first and second violations, meaning only repeat violators will suffer any increased punishments (Detention starts on the third tardy). With the previous policy, the issue of repeat violators (students who were consistently late to school on a daily basis) was entirely skipped. Thirty minute detentions were issued to everyone no matter what strike they were on, be it the first or the thirtieth.

The administration’s new view on this longstanding issue was the best course of action they could have taken. By making these changes, the staff has shown to be focused more on education, rather than punishment.

Making the student accountable for their own punctuality helps them prepare for a life outside of school, primarily in future jobs and careers. Showing up late to work repeatedly causes the employee to appear as if they do not care about their job, and unlike a school setting, employers do not have time for unmotivated workers. Instead of sitting in a detention room, workers will find themselves sitting in their living room trying to find a new job.

[vision_pullquote style=”1″ align=””] Being on time is now solely the student’s responsibility, and missing out on any information due to tardiness can no longer be blamed on the school. [/vision_pullquote]

Negative aspects that plagued the old system such as punishments that were repetitive in nature and the lack of a warning were either changed completely or expanded upon. Taking students into consideration was the key to solving this perplexing puzzle revolving around tardies.

“We found that the 30 minute detentions did not do anything for the students, so we decided to increase the time after the fourth tardy. Hopefully, they’ll learn their lesson because an hour and a half is a very long time,” Dean Trish Taylor said.

One of the sole complaints that may arise from the policy is that the 7 a.m bell is a no-nonsense final warning of sorts; trying to enter class after final bell is a futile effort. Administration has to be strict on this, however, as the bell is there for the sole reason of enforcing the tardy policy. If the school provided a one or two minute leeway for tardies, the bell would be irrelevant

Now that the outdated tardy protocol has been eliminated, students do not have to worry about running late a few times. However, running late more than a few times may cause some trouble.

Punctuality is a learned ability, and for some, a much-needed lesson.