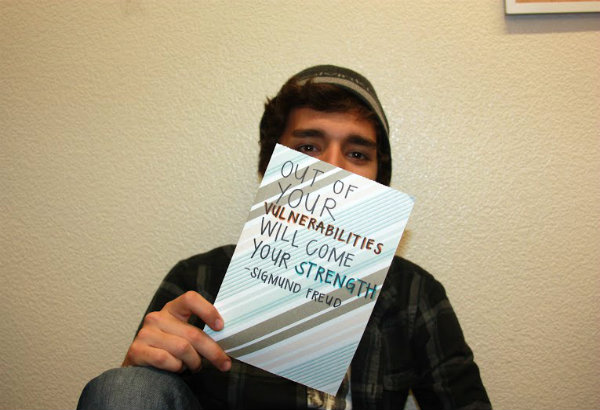 In the words of famous psychoanalytic psychologist Sigmund Freud, "Out of your vulnerabilities will come your strength." Photo Credit: Nikki Molina

There is a general non-spoken rule in our society that people do not express vulnerability. Vulnerability, at its core, is uncertainty, risk and emotional exposure. It’s regarded as the core of fear, grief and disappointment, or in other words, the emotions that most do not want to feel.

In modern society, showing vulnerability in any form is seen as a form of weakness. Due to certain gender roles, men especially, are expected not to show any kind of vulnerability; they are expected to constantly portray a sense of strength and vitality, and are often ostracized for showing any emotion or sensitivity. People are expected to be brick walls of strength at all times, often putting them in the mindset that they cannot ask for help when it is needed.

“My inability to lean into the discomfort of vulnerability limited the fullness of those important experiences that are wrought with uncertainty: Love, belonging, trust, joy, and creativity to name a few,” Brene Brown, social worker, researcher and public speaker said.

Individuals put on armor that protects them from slipping into dark emotions and prevents them from being vulnerable. Though vulnerability is the center of difficult emotion, such as fear, guilt, and discomfort, it is also the birthplace of every positive emotion that is needed in our lives, such as empathy.

No one trusts a seemingly perfect person, because perfection hardly exists in people. Every person has a weakness; even Superman has kryptonite. Recognizing this should not be a crime—rather, it should be acknowledged and embraced.

As pointed out by Brown, when you ask people about belonging, they tell stories about their worst experiences of exclusion. Vulnerability helps connect people to one another as relations are made through the exchange of human emotions, and in order for that connection to happen, people must allow each other to be seen in our most genuine form, weaknesses included.

Embracing vulnerability can lead to a much more open life, or in some cases, can even serve as the solution to a roadblock to success, happiness or rehabilitation in one’s life. For example, in the television series “The Legend of Korra,” the main character, Korra, possesses a stubborn and tenacious personality. After enduring extreme trauma, Korra enters a physical and emotional rut that prevents her from being able to do virtually anything, and is unable to escape this bind until she can let go of her headstrong front and become in touch with her vulnerabilities.

Even the greatest leaders have the self-awareness to recognize this fact. They also recognize that showing their vulnerability is a sign of courage and strength.

Ultimately, embracing vulnerability allows us to be our truest selves; it creates a sense of belonging in the world, and reminds us that ourselves, as well as everyone around us are human.