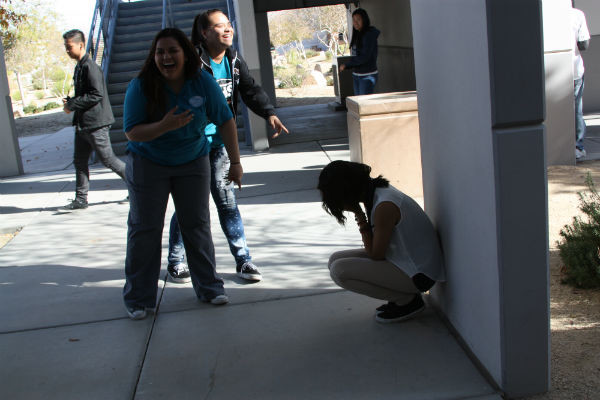 Publicly shunning and making fun of someone is considered bullying, and is seen in both males and females.
Photo Credit: Alex Nedelcu

It seems as if females, by nature, are meaner and have more of a backbone than your average male. This is supported in movies, books, and day-to-day life. Sure, most of the time, the bullies in movies are males, but females have to ability to portray that “sticks and stones will break your bones,” mentality, and by all means, words do hurt. I realized this when a close friend of mine was trying to give me advice.

“You have to be mean! You’re too nice to everyone, and that’s why you always get hurt.”

I looked at my close friend with shock. Is this what a girl’s life is leading up to? Building “mean walls” just to protect your feelings? I think not!

Obviously, I did not take that dreadful piece of advice, but it did make me think. If girls are supposed to be mean, and have more of a backbone, are guys supposed to be nice, and be more vulnerable? Do the roles ever switch?

[vision_pullquote style=”1″ align=””] Is this what a girl’s life is leading up to? Building “mean walls” just to protect your feelings? I think not! [/vision_pullquote]

I tried out a “mean streak” for a couple of weeks to answer my questions, and, to be honest, it was thrilling! Being colder toward people not only makes you seem more assertive, but also gets things done faster.

And I was really enjoying my mean streak, until I got a nasty wake-up call: “Alex, you really need to cut it out. You make it seem like you don’t have feelings, nor do you have a heart.”

O-U-C-H! That one stabbed me straight in the heart with a twisting knife.

I realized one fact from my experiment: sure, being mean will get you where you want to be, but it will not build up any personal connections. Instead of a nasty “POST YOUR STORY ON THE WEBSITE, NOW!” I used a simple “Hey, do you think you’re able to post your story on the website in a couple of minutes? By the way, how was your weekend?” A smile and a question can really go a long way.

Look at Regina George from Mean Girls: she was mean, she was nasty, she was rude. What did Regina George end up with? No friends, a ridiculous weight gain, and (I hate to ruin it for you), but she got hit by a bus. By all means, I am not saying that this will happen to someone if they give you a dirty look, or throw a snide remark at someone while they are having a bad day, but karma can work its magic, and boy did karma hit Regina George.

You don’t have to be Regina George, and you don’t have to be Mother Theresa in order to protect yourself from getting hurt, whether it be in a relationship, or just in general. Yes, girls might seem to be meaner emotionally, and guys could be tougher physically, but the key to leading a positive lifestyle is to be who you are, and who you are is so fetch!