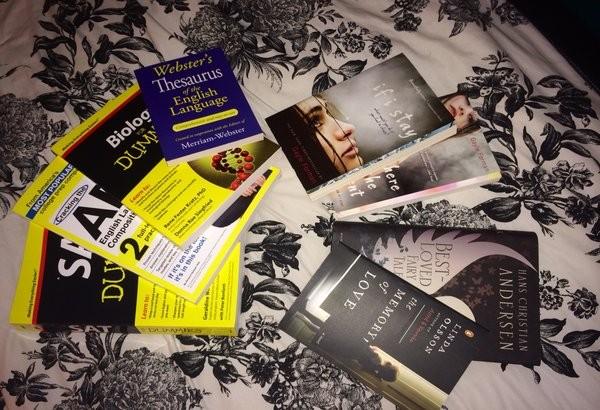 Unfortunately, while I would rather read the literature on the right, my life has consisted of the left selections more. This is a prime example of romanticism vs. realism.
Photo Credit: Alex Nedelcu

Picture this as I tell the story: Saturday night, mug of Trader Joe’s chai tea in my hands, mismatched pajamas, and an overbearing craving for pasta in my system, I relied on my only friend, Netflix, to soothe my boredom. After almost fifteen rigorous minutes of scrolling up and down my TV screen, I decided upon my favorite Netflix selection, Stuck in Love.

You don’t understand–I love this movie more than I love other things (like pasta or tea or mismatched pajamas). And for some odd, unspoken reason, it feels wrong not watching that movie at least once every two weeks. This is becoming a problem and I am fully aware of it. Though I can probably recite the flick’s lines like I can say my own name, every time I watch it, I notice at least two new lines or qualities that I was not aware of before.

That Saturday night was more special than others. The line I had discovered that night was absolutely crucial for my experiences to come.

“There are two kinds of people in this world. Hopeless romantics and realists.”

That was all. Two sentences consisting of words I had already heard coming out of the character’s mouth in that same order, but I had never given them much thought. For one (as I grew hungrier and paused the movie to cook my highly anticipated pasta dish), I have always been graced with the comparison that I am similar to the main character, Samantha, in the movie. This, clearly is a way to romanticize my personality.

In reality, I am not a successful writer and full time college student with the perfect boyfriend and a successful author for a father (although one can wish, right?). Not only was I struck with the realization that I wasn’t necessarily up to par with Samantha’s life, I also realized that all around me, every day, I am faced with a surplus of romanticism and a too-small quantity of realism.

For instance, Twitter is filled to the brim with rromanticized teenage notions of what a perfect life, relationship, and future would be like. Individuals who are not even in possession of a driver’s license are fast to rave about the house they will buy (I have even seen instances of actual photos of the respective residence being shown on Twitter).

Though I am a firm believer in aspirations and goals, I believe they highly differ from fantasies. My goal is not to degrade anyone’s hopes and dreams, especially my peers’. However, I notice the reluctance to accept the realisms of some of my peers, as well as myself.

Perhaps the reason I watch this movie as if it were my religion is because I like to remind myself that my dreams will not be handed to me on a silver platter. Life is, in no way, a movie. I can use up the rest of my seventeen year-old 11:11’s to wish I was living in New York City with a pet cat named James Franco. Or I can use up a lifetime’s worth of realism to work my way up to the Big Apple. I know it will happen, and my faith is not considered romanticism.