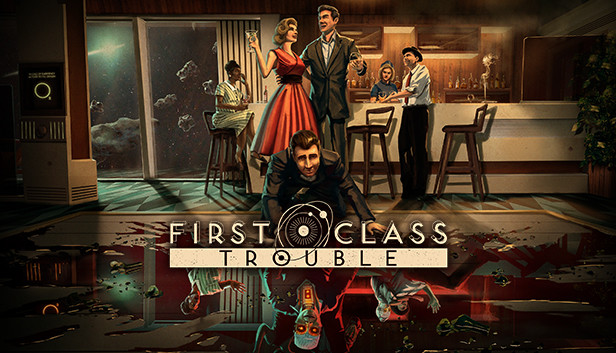 First Class Trouble, is an intrigue party game that revolves around two teams of players working for separate goals, synths and passengers. .
Rating:A+Image Credit: Versus Evil

“Among Us”, was, by far, my favorite party game, ever. As the popularity of “Among Us” has waned, developer Versus Evil has come out with a new game called “First Class Trouble,” a six-player party game in which there are two hidden synths, also known as robots, whose objective is to kill the other four players. The passengers goal is to disable the ship’s rogue AI mainframe, through a series of three rounds.

In the first two rounds of the game, there are three keycards hidden: Red, Blue, and Green around the map, which must be acquired to move onto the next round. Players can also pick up oxygen canisters that can be collected to refill the ship’s O2. However, they slowly drain as time passes due to the ship’s rogue AI that is trying to kill the passengers. When or if the O2 fully drains, the synths win, and the passengers die. If the passengers make it to the third round, if everyone who’s left is human, they all must work together to turn off the ship’s AI mainframe.

Something that really caught my eye was the use of proximity voice chat, a feature missing from the base “Among Us.” In that game, players can only speak to other live players once a meeting is called; however, throughout all of “First Class Trouble”, players are able to talk to the other passengers who are near them, with voice chat, allowing for much better coordination.

On the topic of meetings, in between each round, a meeting is held, in which the players can choose to vote off one player, and will receive clues as to whom the synths are depending on what documents they collect throughout each round. The tensest moments of the game are when arguments arise in a meeting room over whether or not another player is a synth or a passenger breakout.

As for the gameplay, I find it to be far more engaging than “Among Us.” One of my favorite moments was my friend yelling for help just before being eliminated by a synth. Due to the proximity chat, it was muffled for everyone in the area, leading to a very confused and tense moment where we couldn’t figure out who had attacked him.

While I love the game, it doesn’t negate the optimization issues, though, this game is very early in its development cycle, and this can be forgiven. However, what I find utterly frustrating is the lack of a five-player mode, instead of requiring you to have six people to play. It is difficult to get that many people on to play especially during weekdays.

When playing the game at first, I felt as if it would be 3D “Among Us” on a cruise ship, but I was pleasantly surprised that this game not only surpassed that expectation but replaced my favorite intrigue game. For its $14.99 price tag on Steam, I would recommend anyone pick up this game, as it’s definitely worth the price.