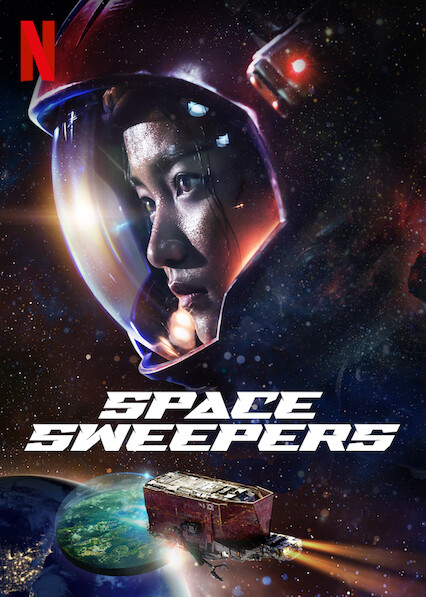 “Space Sweepers’ was lovable in every way, from their layered, diverse characters, to their perfect pacing and effective life lesson.
Rating:A Photo Credit: Bidangil Pictures

Imagine: it’s the year 2092 and the Earth is in ruins due to human selfishness and negligence. The human race has no choice but to ascend to space to find a new way of life. But here is the kicker; only the rich and affluent are able to live a peaceful life in space on a man-made planet that is seemingly paradise. The rest of mankind is doomed to live on an unlivable Earth, their only means of making income is by going to space and collecting debris to sell it for money, and hopefully getting enough to buy them and their family a better life.

This is the reality for Mr. Park (Jin Seon-kyu), Captain Jang (Kim Tae-ri), Bubs (Kim Hyang-Gi), and Kim Tae-Ho (Song Joong-ki) in 2021 “Space Sweepers.” Four unlike people that work together to collect space debris, scoring a few bucks here and there to pay off debts and loans. That was until they come across a little girl named Dorothy, who proves to be the biggest score of money that they’ve ever caught.

This dystopian sci-fi film combines all of my favorite movie tropes and cliches, making them fit the aesthetic of futuristic outer space. It discusses the importance of family and corruption, two very different themes that are seamlessly put together to create a well-balanced and perfectly paced masterpiece. The movie starts off by explaining the state of the universe, then introducing our main character Kim Tae-Ho, a man who cannot afford a decent pair of shoes and is knee-deep in debt, looking for his lost daughter. We follow him as he goes on to do his implied daily routine of collecting debris and looking for his daughter in his spare time, as those he comes in contact with seem to have some familiarity with him and his situation.

Even though it’s a Korean movie, I was surprised and delighted to hear multiple languages being spoken throughout the movie such as Chinese, French, and English. They kept the idea they introduced, people all over the world becoming space sweepers, true and consistent. I have personally watched movies where parts of the story would not hold up, especially when it comes to talking about ‘saving the world’ or just involving the entire human race as a whole; those movies usually only mean the United States and some random country in Asia and deeming that the “entire world.” And to top it all off, there were no racial stereotypes being pushed onto these supporting characters,  where it is only clear where they are from by their language, how they dress, and their country’s flag in each of their ships.

The film utilizes every character and does not just use them as a foil for the main character, or have them in the story solely to develop the main character’s own story. Every character I listed had a story, a reason why they are where they are, experiences that shaped them in their lives, and what they are personally fighting for. Yes, the film is mainly focused on Tae-Ho trying to find his daughter, that’s the whole reason he is a space sweeper, but his conflicts and inner battles are not the only focus of the plot.

Planet Facts Educational Infographic by Madison Land
This movie is also pretty heavy on utilizing popular movie tropes and cliches but in its own unique way. One that I noticed and found pretty neat was how they had loosely based part of the story and adventure the characters are going on to “The Wizard of Oz,” with the biggest indication being the little girl they find is named “Dorothy” and is being hunted down by the government and a terrorist group because of the power she possesses, just like how Dorothy in “The Wizard of Oz” was being hunted down by the Wicked Witch and her monkeys for the powerful Ruby Slippers, trying to get back home just like Dorothy in “Space Sweepers.” It’s not an obvious nod at the classic movie, but it’s still noticeable in a cool easter egg kind of way.

Space Sweepers executes its intentions flawlessly. Every character had a story, a purpose of their own for being a part of the adventure. They were able to successfully utilize the best movie tropes out there: found family, corrupt government, and anti-heroes. This film was well thought out and amazingly planned, hopefully more movies on Netflix continue to be released of the same quality.