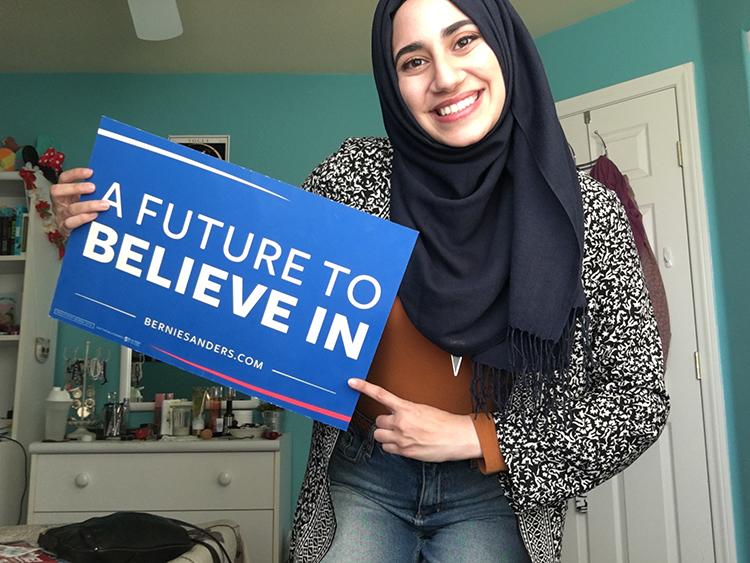 This past Sunday, myself and a friend attended a Bernie Sanders rally at Bonanza High School. Although I have become more interested in politics since taking part in the We the People competition and being in AP U.S. Government and Politics, going to the rally definitely broadened my perspective on the Presidential campaign, civic participation, and democracy in general.

As teenagers (or at least those of us who are under the age of 18), we often feel as though we do not have much of a say in politics, as we are not yet legally allowed to vote. Additionally, the topics of government and politics are not covered or offered as a class until our senior year of high school—contributing to the general lack of knowledge of government among youth.

When I entered the gymnasium where the rally and address was taking place, I was surrounded by a sea of blue signs waving, music playing, people chanting, and an overall enthusiastic energy.

However, when political outliers of the race such as Sanders and Donald Trump, in contrast to more established candidates such as Hillary Clinton and Marco Rubio join the race, Americans who may not typically be interested in government start to become more active participants in political events, such as rallies, caucuses and primaries.

Personally, the extent of my political knowledge before taking a Government class this year was essentially limited to what I heard or read from media outlets such as CNN, Fox News, and CBS, which unfortunately seems to be the reality for a large portion of Americans.

After attending the Sanders rally however, I felt more excited and motivated to be an active participant in the campaign and government as a whole. It was amazing to see the amount of people from all different demographics all willing to not only wake up early on their day off, but spend their Valentine’s Day coming out to support a candidate they so strongly believe in.

Even waiting in a long line outside, the spirit and anticipation for the rally remained consistent the entire time, with people cheering, cars honking, and the mutual feeling of everyone wanting to be there. Volunteers for the campaign signed us in, and various organizations handed out stickers, posters, and even Bernie Sanders related valentines. I noticed that for a lot of people there, it had been their second or third time attending one of the rallies, yet they were just as lively as the rest of us.

When I entered the gymnasium where the rally and address was taking place, I was surrounded by a sea of blue signs waving, music playing, people chanting, and an overall enthusiastic energy. Although we stood waiting a while for the speech to begin, the excitement among the crowd made the time pass quickly. We later found out that the reason we were left waiting for so long was because due to the excessive amount of people who weren’t able to fit in the gym, Sanders went outside to deliver his speech to them before us in order to ensure that no one would miss out.

If one thing is certain, it is that seeing success in the primaries so far for unexpected candidates such as Sanders and Trump has left me more motivated to stand up and participate in order to have a say in the outcome of the election, and potentially, American life as a whole.