Chivalrous acts in the modern day The 2017 definition of love 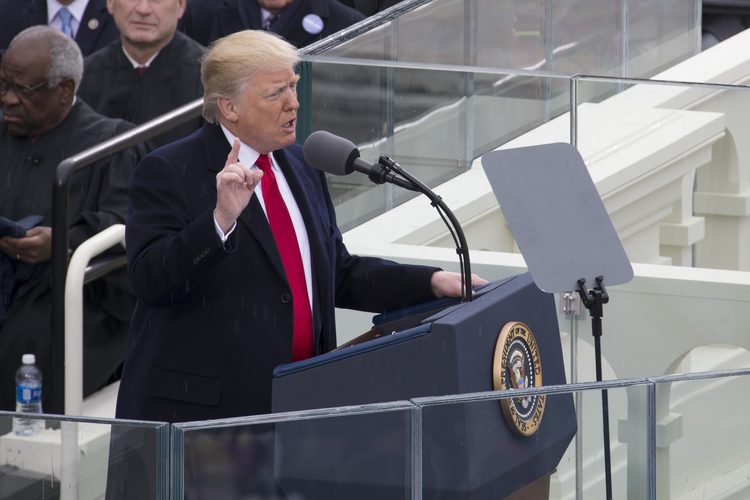 During President Donald Trump's inauguration speech, he neglected to open the door and walk his wife, Melania Trump, to the podium set atop a flight of stairs. Where Michelle Obama gave her, now famous, stink face at Trump. Image credit: Cristian L. Ricardo

After the discussion about whether or not Trump had fewer people attend his inauguration compared to Obama’s, many news outlets gravitated towards the relationships of their respected marriages. On the surface, it seems that Barack Obama treats his wife respectfully, while Melania Trump is usually seen as distant from her husband.

The concept of being chivalrous originated during the Middle Ages. Being courtly to one another involved the Code of Chivalry, which was a set of rules on how to be respectable. There are many ways one could be chivalrous back in the day, like controlling one’s emotions and being respectable to their partner. But the phrase “Who says chivalry is dead?” is popular for some reason, seemingly because of how rarely people practice it.

Although, there are still ways someone in the 21st century can be chivalrous without looking like they belong at King Arthur’s round table. Here are seven surprisingly rare yet easy acts of chivalry one can execute in time for Valentine’s Day.

A classic: you can hold the door for your significant other. I wouldn’t want a door swung into my face if I’m in a rush. Although it may be low effort, the thought is still present. You should also hold the door for other people because it’s rude not to.

Instead of picking up your date with the honk of your car, why not just walk up to the door? While you’re at that, at the end of the date, walk your date to the door. Whether it’s the first or 50th date, effort is still a strong variable in someone’s affection.

Always have money ready for the date. Don’t be that one person who suddenly forgets their wallet. Even if you aren’t the one who pays, there’s no stopping you from asking to pay just to be polite.


Don’t text and date. Looking at your phone every few minutes indicates that you have something better to do. If you’re only checking your phone to check the time then I think it’s time to get a watch.

Get to know your partner’s friends and family. Establishing a level of connection shows a sign of understanding. Also, get ready for some drama. It’s now your drama. Have fun.

Relationships shouldn’t be scored. “If I took you to Homecoming, you’re entitled to take me to Winter Semi-Formal.” This phrase shouldn’t be uttered in any similar way.

Lastly, make sure you pick the right person for you, not the perfect person. Imperfections are a characteristic quality if you’re just looking for someone to look at, then you’re not mature enough to be part of someone’s life.