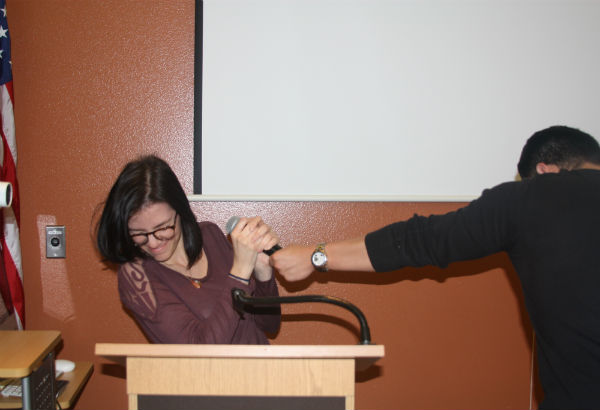 Personally, I would be offended to have my victory flawed by a passerby. A moment is a moment well-deserved, and that should be respected.
Photo Credit: Summer Thomad

While I would like to sit and write an entire high school column about how much you have been a bother to folk lovers all around the United States via your stunt at the Grammys this year, I will keep it short:

In 2009, your stunt against my favorite musician, Taylor Swift, broke my heart to pieces. The pent-up anger I gained from your careless act of ripping the microphone from her hand and bashing her well-deserved win was absolutely unfathomable. And, Mr. West, with all due respect, as I started to overcome your heartless stunt, the band aid on my heart was inattentively ripped by your ignorance toward Beck’s victory during the past Grammy Awards.

To bash a man who knows how to play 15 instruments (including beatboxing) is an absolute act of popular culture crime. And, Mr. West, how dare you even think to walk on stage when someone else’s spotlight is well-deserved? Have you not gotten your time to shine? As if your 21 Grammys are not enough.

[vision_pullquote style=”1″ align=””] Sir, you should not be the one preaching about respect when you are rushing on a stage and stealing a spotlight which is not, by any means, yours. [/vision_pullquote]

When you said “Beck needs to respect artistry and he should have given his award to Beyoncé, and at this point, we tired of it,” what did you mean by “we?” Is there an entire army (not counting the Kardashians) behind you, bashing Beck, as well? Should the academy truly reconsider their choice and award Beyoncé instead? Sir, you should not be the one preaching about respect when you are rushing on a stage and stealing a spotlight which is not, by any means, yours. Perhaps a little self-control next time.

And with all due respect to Beyoncé, a 17-time Grammy winner, Beck did deserve this award in a higher regard due to the pattern of Album of the Year victors in the past three years, including Adele in 2012, Mumford and Sons in 2013, and Daft Punk in 2014. Giving this award to Beyoncé would throw off the pattern of the “lesser-knowns,” as you would call them.

The academy did not seem to award this privilege to Beck due to their “respect” for the artist per se. Instead, I believe Beck’s “Morning Phase” was well-deserving of the win due to the uniqueness the album brought. The entire album keeps up this constant beckoning for vague admiration: something not many artists are able to produce–especially those over the age of 40.

Beck’s album, “Morning Phase,” was, indeed, true artistry, and you sir, should be the one to respect it.

A lover of the artists you seem to hate most.