Guiltless Pleasures Why should we feel guilty about the things that bring us pleasure? 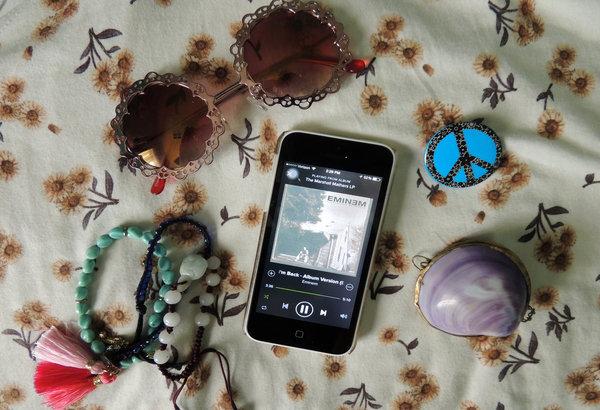 Although being an Eminem fan may seem out of character for someone like myself, I embrace it as a part of who I am instead of passing it off as a guilty pleasure. Photo Credit: Summer Thomad

“So, what are your guilty pleasures?”

This age-old “getting-to-know-you” question has been asked for as long as I can remember. But what I have never understood about the term is that if something, whatever it may be, makes you happy or gives you pleasure, why should you feel guilty about it?

I believe that the idea of guilty pleasures roots from the mentality that each person falls into a certain personality-based archetype, and anything that strays from that becomes a violation of the image they are trying to emit. Sheltering oneself in a restricting box that accommodates to an image or label is enough to prevent them from being able to grow as a person.

In my case, I am the kind of person my sister would describe as a “flower-eating hippie” -an anti-violence, art and musical theatre-loving, feminist ABBA fan. As a matter of fact, it is not unlikely to find me enthusing over unique terrariums on Etsy. But recently, my go-to artist to listen to on Spotify has been Eminem, the polar opposite of my sister’s description.

[vision_pullquote style=”1″ align=””]Keeping an open mind and having perspective on the world around us is the best way to avoid having a one-sided identity. [/vision_pullquote]

Another example could be a heavy metal rock fan discovering that they love the sounds of bands like ‘N Sync or One Direction, or the star football player loving a show like Pretty Little Liars. Even though their image portrays them to be tenacious and into more stereotypically masculine TV shows, they are drawn in by the ever-changing mystery, even though it appeals to largely female audience. Instead of accepting that as part of who they are, one might demote it to being a “guilty pleasure,” and pass it off as a joke because it seems so out of character, or because it may portray them as un-masculine.

Although maintaining a certain image may seem important, prescribing oneself to a certain label does not allow much wiggle room for personal growth; this can be a problematic mentality for adolescents to form. However, it is a tendency that I have noticed that is all too common among people my age. Keeping an open mind and having perspective on the world around us is the best way to avoid having a one-sided identity.

Reputations aside, the best way to continue to thrive is to not restrict yourself when it comes to what makes you happy. Allow yourself to ask questions and be curious because after all, curiosity is one of the best human qualities, as addressed by one of my favorite Youtubers, Hank Green.

Personality is fluid, undefined and constantly changing. Accepting that and embracing what makes you happy will make you a more well-rounded and generally happier person.