I am a feminist 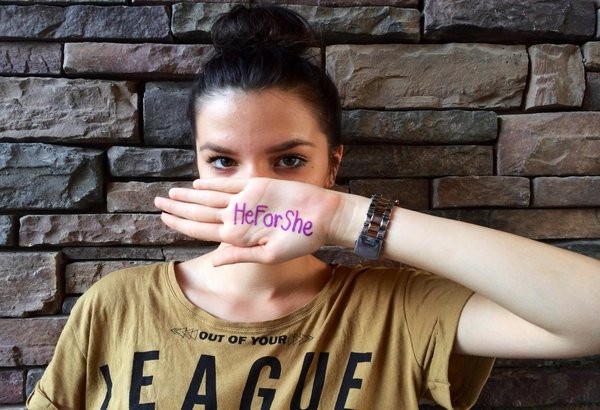 As a feminist myself, I was intrigued to hear about the HeForShe campaign.
Photo Credit: Rebecca Live

“It is time that we all see gender as a spectrum instead of two sets of opposing ideals. We should stop defining each other by what we are not, and start defining ourselves by who we are.”

Emma Watson, 24, stood before United Nations representatives to present a new campaign, HeForShe, in order to fight for feminism and gender equality as a whole. Not only did social media explode in loud bursts of “wow, well done!” or “she is the definition of ‘white feminism,’” the speech received some much needed airtime, regardless of whether it was positive or negative.

Upon watching the speech, I observed two important points. For one, Watson was clearly nervous. Her voice shook, her breath caught, and her hair was unruly. Nevertheless, her speech not only addressed the denotation of feminism, but also feminism from a man’s perspective (a point that is not often enough mentioned when speaking of human rights). Additionally, Watson left her reputation as an actress behind and on that day, she held human rights in the highest of regards.

I was impressed. Until I logged on to my social media accounts, that is.

Watson placed men and women on the same leveled pedestal. She addressed feminism as being a “human right” more often than actually using the word “feminism.” She talked about women’s salaries in comparison to men’s and she alluded to her personal take on the issue. And despite her shaking hands and voice, Watson covered the ground that should have been covered a long time ago. As UN Women Goodwill Ambassador, she took the word “feminism” and conveyed an actual meaning. A practice, even. She cancelled out the feminine connotation of the word.

“I want men to take up this mantle so their daughters, sisters and mothers can be free from prejudice but also so their sons have permission to be vulnerable and human, too and in doing so, be a more true and complete version of themselves,” Watson said.

The aforementioned point was one I had never heard being brought up in the past, because as a feminist myself, I mostly discussed the unfairness of treatment toward women. Never had it crossed my mind that men, too, are roughly targeted by their gender counterparts as not being up-to-par with society’s view on “manhood.” During the speech, Watson’s confidence spread to a large audience, giving her speech the attention it deserved. Her words were well-written and clearly stated. Her words did not grant her the title of Hermione Granger, or even an actress reputation.

That day, Watson served as a figure of society. She was a human with a point; not an “angry feminist.”

The claims I gathered on social media were biased and unworthy of another glance. One fact was certain: Watson’s speech should be the catalyst for men and women alike acquiring a grip on feminism and its true denotation (feminism, by definition, is the equality between men and women; it has nothing to do with man-hating). Many points, such as her personal experiences of being patronized as a woman, were enough to change one’s mind about feminism.

However, Watson left one fact crystal clear: Feminism is synonymous to human rights and to prove the latter, we need a consistent balance of men and women supporters.

Watson finished her speech with the following: “We must strive for a united world but the good news is we have a platform. It is called HeForShe. I invite you to step forward, to be seen and I ask myself: if not me, who? If not now, when?”