My profession is not a costume What is the difference between a nurse’s and doctor’s stethoscope? 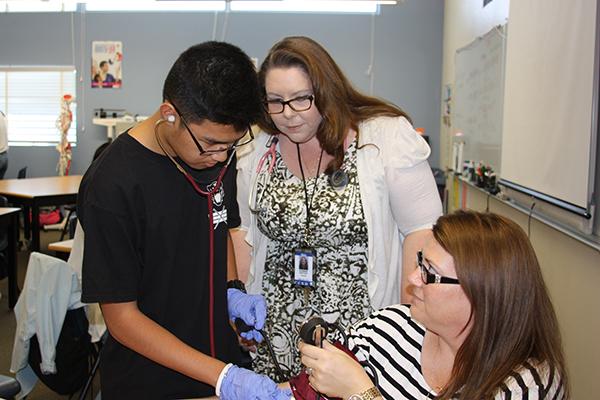 The long-running talk show “The View” has been responsive for vacuous comments that would be expected of “Keeping Up with the Kardashians,” their most recent blunder was their response to Miss Colorado‘s appearance during the Miss America 2015 pageant.

“The View” is a daytime talk show hosted by multiple prominent women such as Raven-Symone Pearman and Whoopi Goldberg. The show has been running since 1997 and has racked up 19 seasons.

While “The View” has been a fairly successful show, controversial discussions towards if gay couples can marry, if abortion is morally right, and most recently, the situation regarding Miss America resulted in their ratings to wither slowly.

During the talent portion of the Miss America contest, Miss Colorado, Kelley Johnson, performed a monologue about her job as a nurse as opposed to the more traditional talents most contestants showcase such as twirling a baton and dancing.

When I heard Johnson’s monologue describing a heartfelt experience with a patient, I was in awe. She didn’t have a flashy magic show or a harmonious singing session—she had her profession. Instead of being admired for breaking the standard that women are just there to entertain, she was criticized.

“She came out in a nurse’s uniform and basically read her emails out loud and shockingly did not win,” co-host Michelle Collins said.

Not only did Johnson wear scrubs, but she also wore a stethoscope around her neck—a target for co-host Joy Behar, who made the mistake of saying that only doctors utilize stethoscopes in the workplace. A stethoscope is an acoustic tool used to hear bodily sounds. Respiratory therapists, maxillofacial surgeons and pediatricians use stethoscopes on a daily basis. Stethoscopes aren’t restricted to just doctors, multiple medical professions utilize them.

Collin and Behar’s comments about the nurse community sparked an uprising of controversy on social media. The popular hashtag “NursesUnite” has reached over 800 tweets on Twitter, ultimately reaching five million users.

After multiple fans crowded to defend Johnson’s choice to wear scrubs, the hosts of “The View” finally caved in after four days of mockery and made an on-air apology. Their perspectives on how important nurses are surely shifted from being an extra to a necessity in the hospital.

It is incredibly dim-witted to ridicule someone that has spent their life saving other lives. Johnson spent years in medical school in order to get to where she is today. Showing pride in your profession is a skill most people don’t possess. Saving lives and connecting with others makes Johnson a remarkable woman and she is truly an inspiration.

Making fun of a certain profession takes a large toll on the next generation. Think of the children who aspire to become nurses, one day finding out that being a nurse won’t come with respect. Crushing one’s dreams and aspirations can be compared to a stab in the heart, an irreparable wound to remind one that someone in the world thinks of them as lesser.

A sea of rage and a flood of hate could have all been blocked if the hosts stopped and took thought in what they were going to say. Johnson stood on stage and spoke her mind in what her profession means to her. It is very rare that I see someone who can wake up in the morning and be excited for their job. Every single day, she takes the initiative as a life saver while being a true-to-heart person. She’s got my vote and I hope she’s got yours too.