Nice Sleep If You Can Get It 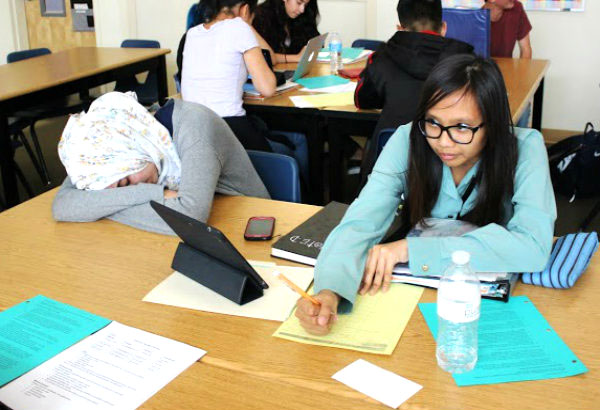 Sleeping in class is not an uncommon occurrence with school start times as early as 7:00 a.m.
Photo Credit: Jenika Chiang

This article was written on April 17th as part of the JEA Writeoff Contest. It was awarded a “Superior” ranking.

For a vast number of high school students, the chime of singing birds and a stream of sunlight are nearly unheard of during a typical school week. Rather, 40 percent of high school students’ mornings, according to Nancy Shute’s “Pediatricians Say School Should Start Later for Teens’ Health,” are met with groggy demeanors and pre-sunrise darkness—signs that suggest one should still be tucked into bed.

The ongoing pursuit of later start times for high schools is not a newly debated topic. However, as mentioned by Shute, recent studies issued by the American Academy of Pediatrics suggest that moving school district start times to 8:30 a.m. or later is a necessary change for the well being of students.

A study conducted by Judy Owens, a sleep researcher at Children’s National Medical Center in Washington, D.C. has found that sleep deprivation increases the risk of traffic accidents, and makes them [teenagers] more vulnerable to depression and obesity.

[vision_pullquote style=”1″ align=””] How can high school students be expected to maintain a healthy lifestyle and stay focused throughout their busy days without a substantial amount of rest? [/vision_pullquote]

By visiting a classroom of any high school in America, the likelihood of finding at least one student (if not several) asleep is high. Sleepwalking and tired eyes are all too common among high school students. With the abundance of responsibilities and activities teenagers partake in, gaining at least eight hours of sleep per night is of critical importance for their developing bodies and minds. How can high school students be expected to maintain a healthy lifestyle and stay focused throughout their busy days without a substantial amount of rest?

Promoting health among students should be a major priority across the spectrum. Without a sufficient amount of sleep, the energy that is vital to gaining a valuable education is lost, therefore preventing students from living up to their greatest academic potential.

Gaining an extra hour of sleep on weekends often leaves me feeling more refreshed and energized; just imagine how much more attentive and focused students would be in class as a result of receiving just one extra hour of rest during the school week.

As Shute points out, a downside to changing school start times is that the action would set off a “cascade of adjustments” with the districts’ shift in schedules, after school activities, jobs, etc. However, making schedule changes for conflicting bus schedules for elementary and middle schools and the inconvenience for the school board of modifying an issue is a small price to pay considering the benefits of a start time change; it does not justify continuing to put students’ health at risk.

Clearly, the benefits of pushing back school start times outweigh the losses by a landslide. An 8:30 a.m. or later start time is a vital adjustment, and should be integrated into school districts across the nation.