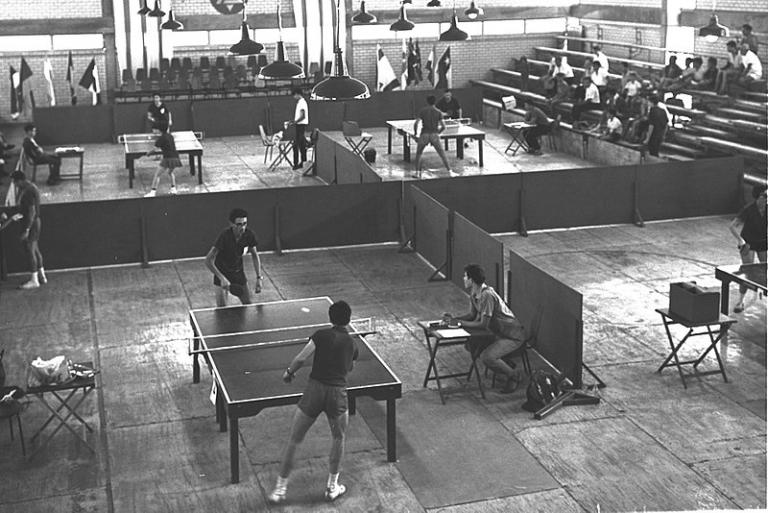 Who would rather watch a bunch of muscled men demonstrate their strength by throwing an egg-shaped ball when you can see two guys smacking a ping pong ball with paddles back and forth a table? Photo credit: The Government Press Office

Do we seriously have the Las Vegas Golden Knights and Raiders as our only major sports teams? There needs to be a change; we can’t just have Los Angeles beat us with their 18 fancy sports franchises. I propose our city’s governor, Brian Sandoval, should branch out and acquire even more teams for all kinds of sports.

It’s not a surprise that sports bring in tons of revenue, so there shouldn’t be any reason not to invest in new stadiums and teams. Everybody knows that Las Vegas locals can all afford to live on the Strip, so bumping up the state tax of everything wouldn’t even be that noticeable. If they can’t afford it, then they should ask their parents for some cash.

We only have a hockey team and a football team. How come we don’t have a major league baseball and basketball team? Scratch that, an underrated sport that deserves the spotlight is professional ping pong. Our city could be the first to showcase the hottest sport ever since thumb wrestling.

Some people might argue that we already have the Las Vegas 51s as a baseball team, so why do we need a major league one? The 51’s have alienated (haha nice one Vinh) themselves so far from the major leagues that they probably won’t even make it big. The best course of action is to form a ragtag group of kids and train them well enough to become the new Babe Ruth. Trust me, I’ve seen both the Sandlot and the sequel.

Since we took the Raiders from Oakland, let’s just do the same thing with the Los Angeles Lakers. Ever since Kobe Bryant left, they would most likely want to move so they could have time to get over their breakup. What does LA have that we don’t have? We have a high crime rate, bad traffic, expensive costs of living and an In-n-out.

Not only do we need to upstage LA, but we should also keep tabs on Canada. I may not know anything about this whole curling thing, but if it’s popular enough, then Las Vegas needs it. We already have a hockey stadium, so there’s no harm in doubling up. That’s a win-win situation right there.

Other than being a complete waste of resources, I don’t really see any flaw in having more major league sports teams in Las Vegas. It’s a necessity for our city to attract sports fans; we’re the entertainment capital of the world after all.