SATIRE: PRO/CON: Nursery rhymes: the real banger Too good for even the Billboard charts 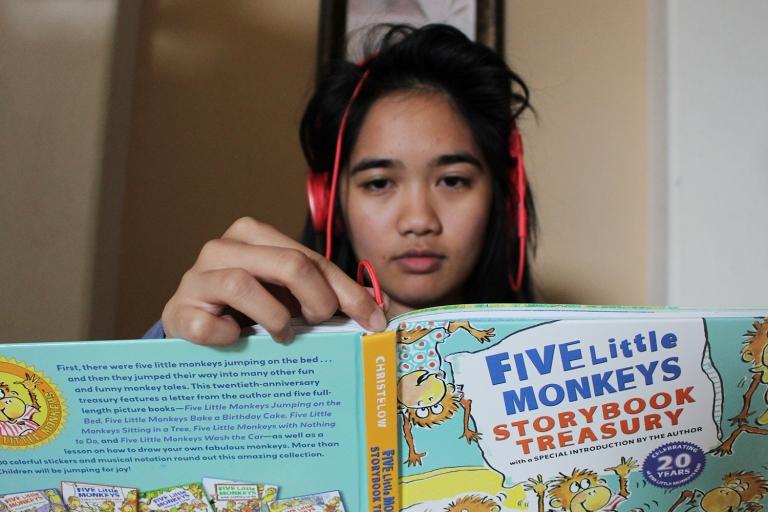 Nothing "slaps," as the kids say, like the rhymes in classic children's books. I bet Five Little Monkeys is what inspired the iconic One Direction. Photo Credit: Cassie Valdez

No offense but nursery rhymes are the only form of music–forget hip-hop or indie. Existing since the olden times, nothing is a more classic work of art than nursery rhymes. These little tunes are the mere foundation of today’s modern melodies. Engrained in the minds of children worldwide, this genre of music is, without a doubt, revolutionary and impactful–from songs like “Humpty Dumpty” to “Row, Row, Row Your Boat.”

First and foremost, I’d like to point out that nursery rhymes are the single most important reason for why music is where it is today, which obviously makes it the outright best type of entertainment known to man. Think about it: every musician, every singer and every songwriter spent their youth singing these simple melodies. This leads to the conclusion that if it weren’t for nursery rhymes, then musicians like the recently viral Mason “Yodel Boy” Ramsey wouldn’t even know what music is in the first place.

Not only that but nursery rhymes have stood the test of time. I mean, how many artists can say their music’s popularity has lasted centuries? Mr. “Yodel Boy” Ramsey will be forgotten in a few weeks, but “Baa, Baa, Black Sheep” has been building “clout” since the early 1700s and will only outlive all of us.

Additionally, because of timeless singers like Mickey Mouse and The Wiggles, these melodies have become more than just songs. They are the bridge between people of all ages, becoming the talking point that unifies generations upon generations.

In a country that’s becoming gradually more politically polarized, at least people can connect on the fact that “Twinkle, Twinkle, Little Star” had them wishing upon the night sky as a kid. I don’t see anybody using Mr. “Yodel Boy” Ramsey’s singing as their nightly mantra.

Not to mention “Old MacDonald Had a Farm” was revolutionary in that it inspired country music since it brought farmers into the mainstream and let that demographic know that they are not ignored. This only proves that the “Yodel Boy” is a mere product of the phenomenon with his classic western, cowboy-esque getup. If anything, it’s messed up that he’s not publicly paying his respects to Old MacDonald on Twitter.

Of course, there is no doubt that modern music is “straight fire,” as the kids say. In no way am I trying to discredit the influence of today’s music; I have mad, undying respect for our generation’s artists. Ranging from remixes of Mr. “Yodel Boy” Ramsey to remixes of the Wii Plaza theme song, the diversity of sounds is just insane. However, I want to emphasize the fact that nursery rhymes are what ignited their blaze in the first place.

Inspiring lyricists from Dr. Seuss to Dr. Dre, nursery rhymes paved the way for rhyme schemes and rhythms in today’s music. No amount of concerts, no amount of Spotify listeners and no amount of reposts on social media will make any modern day artist as influential or memorable as nursery rhymes.