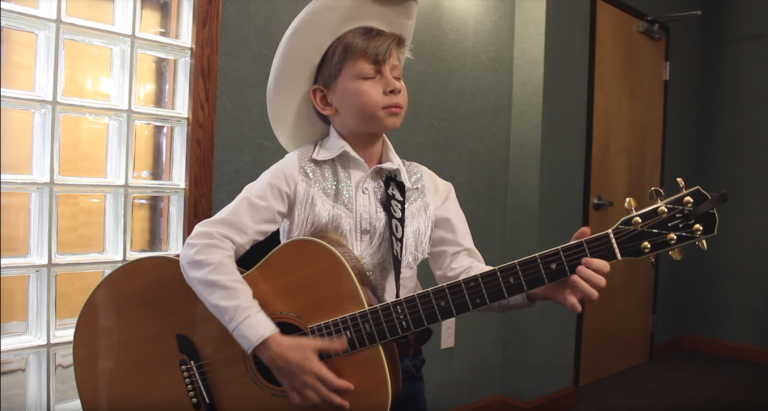 With each step of his leather cowboy boots, a boy walks into a Walmart in small-town Harrisburg, Illinois. Little do the neighboring shoppers know is that Mason Ramsey was going to grace their grocery run with his angelic voice. Tapping his toe, with his belt buckle clinking, Ramsey becomes a viral hit.

While others seemingly believe that Ramsey’s singing will only be a one-hit wonder, people don’t realize his true potential. I believe that all music and everything else people call “masterpieces” should bend their knees to Ramsey’s rendition of Hank Williams’ “Lovesick Blues.” The yodeling boy is the pièce de résistance to end all musical works.

The yodeling boy has accomplished more than any artist has ever done and all while not even being old enough to drive. Even children can understand that Ramsey is a better artist than their so-called “nursery rhymes.” For one thing, Mother Goose, the “queen of nursery rhymes,” is just a fictional character orchestrated by corporate America. Meanwhile, Ramsey can relate to kids more because, hello, he is a kid.

The fact that there are some children that still listen to these nursery rhymes just proves that their minds are being brainwashed.  First of all, “Humpty Dumpty” is just about an anthropomorphic egg and “Old MacDonald Had a Farm” just tells you what sounds cows make. However, Ramsey’s music actually has substance.

The yodeling boy utilizes his divine voice to warn the populace about the eventual destruction of the universe. “The last long day she said goodbye, Lord I thought I would cry.” Of course, the last long day is symbolic of the world, and the person saying goodbye is God. Ramsey is the be there and  end all for all musicians in the history of music.

Additionally, children and adults alike should be able to listen to the same music. Nursery rhymes are almost exclusively just young kids. Meanwhile, the yodeling boy can be enjoyed regardless of one’s age. Ramsey’s lyricism caters to an older audience, while his age and voice are relatable for kids.

Some may ask, “How are we supposed to take him seriously in a Walmart?” The answer is quite simple actually. Walmart is a retail store. People go to retail stores. People need food. Where do you find food? At the grocery aisle. Grocery has seven letters, so does Twitter. The yodeling boy video was posted on Twitter. Ramsey predicted his upcoming fame through expertise calculation and precise planning.

Recently, he performed at Coachella to a crowd of festival-goers. The last time I checked, Mother Goose never met Justin Bieber. Nursery rhymes just don’t have the same impact as a little country-singing 11-year-old. They should just stay in their own lane and remain collecting dust.

The sole reasons why the Yodeling boy became famous is his line, “Lord I love to hear her when she calls me sweet daddy.” There’s not a dry eye in sight when this emotional phrase is sung from Ramsey’s godly vocal chords. Although he’s covering some cowboy’s song, the fact that Ramsey could perfect “Lovesick Blues” is a testament to how great of an artist he is.