Dance, dance, revelation It's okay to ignore the status quo 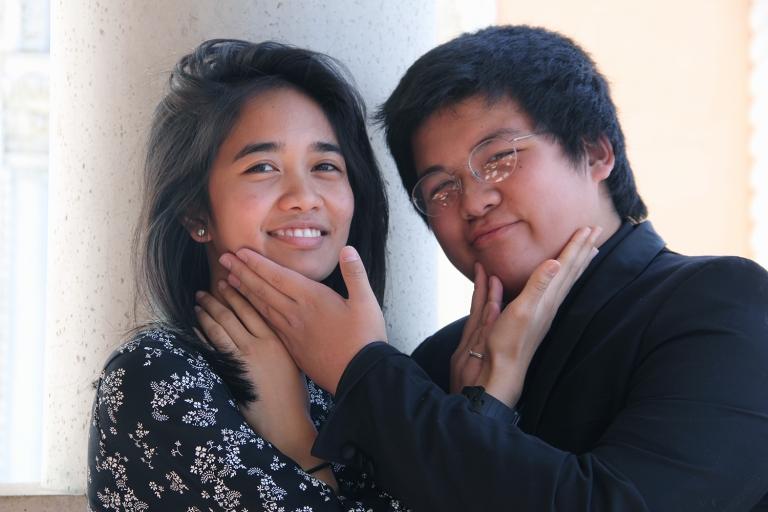 Last year, my fellow columnist Vinh and I asked each other to Prom because we didn't know who else to go with. Photo Credit: Justine Ho

One of my least favorite high school memories was at homecoming my sophomore year. Staring aimlessly at an art piece that I don’t remember the name of, I sat alone in a gallery, bored out of my mind, wearing a dress I was uncomfortable in and doing my best to avoid any interaction. My friends ended up finding me a couple minutes later, and they dragged me downstairs to the dance floor.

I’ve never liked school dances. I hate dressing up in fancy clothes and curling my hair. I try my best to avoid large crowds at all costs. I don’t understand how to dance or why the music needs to be so loud that I can’t hear myself think. However, despite how much I resent these sorts of events, I still plan on attending prom in May.

While I don’t think dances are as amazing as people make it out to be, I do think it’s an event worth experiencing, especially with people who mean the most to you. Even though I was bummed out during homecoming, the best part of that night was being able to spend hours with my friends beforehand, watching them put on makeup, then rushing to In-N-Out afterwards.

Not only that but it’s exciting to ask someone to a dance. As a big fan of grand gestures, I think Promposals are one of the nicest things somebody can do. For prom junior year, my fellow columnist Vinh and I decided to make posters for each other because we’ve never been asked to a dance before. When we revealed what we made, our faces lit up immediately; it was one of the sweetest high school moments that I’ve had.

Additionally, some of my friends are currently stressing out about what dress they’re going to wear or who’s going to do their hair, but dedicating too much energy on one’s appearance is a waste of time. It’s only one night; there’s no point on spending money something that will only last a few hours. However, I do admit that sometimes I get caught up in prioritizing looks. To combat that issue, I remind myself that I don’t have to take everything so seriously.

In fact, since freshman year, I’ve maintained a running joke that I’ll wear bedazzled scrubs to prom. But since my friends advised me not to, I will instead be showing up in a top that looks and feels like a vintage curtain; I found it while thrifting. My mom thinks it’s ugly, but I was dared to wear it by a friend and I refuse to back out.

School dances aren’t everything, but that doesn’t mean you shouldn’t attend. Even if these sorts of events aren’t your thing, I still recommend that see where the experience takes you. For a number of people like me, the extravagance initially holds them back from attending, but it’s important to remember that you can control how you respond to the situation. When you spend your night with people who you enjoy, you may end up having more fun than you anticipated.