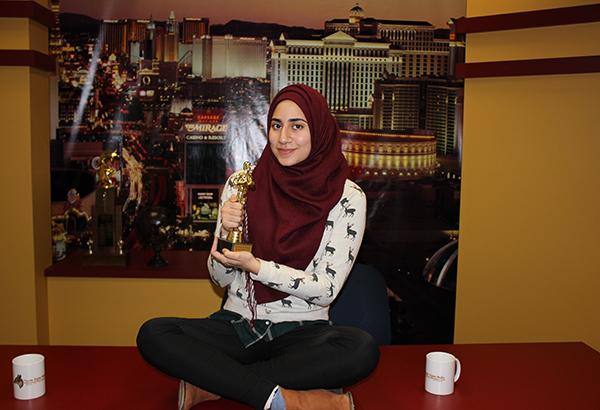 Though the chances of receiving an Oscar are quite unlikely, I would most definitely use my speech to do more than simply thank the Academy. Photo Credit: Migi Contreas

With the red carpet rolled out and familiar faces painted to perfection, the Oscars awards ceremony has been one of the most anticipated annual events in Hollywood since its establishment in 1929.

Though one can easily disregard this event as a shallow excuse for celebrities to be dolled up and admired by the public, this year’s Academy Awards served as a platform for some of the night’s winners to speak out about issues of importance. Surely, rain descending onto the red carpet was not the only surprise at this year’s Oscars.

As a matter of fact, several of Sunday night’s winners made a point to address social issues during their speeches. Three in particular stood out throughout the night.

Patricia Arquette of “Boyhood” announced, “To every woman who gave birth to every taxpayer and citizen of this nation, we have fought for everybody else’s equal rights. It’s our time to have wage equality once and for all and equal rights for women in the United States of America.” In response, Meryl Streep herself stood and cheered her on, which says enough about Arquette’s willingness to use her time to draw awareness to social inequality.

Additionally, in their speech, John Legend and Common addressed the high rate of incarceration among black men and the changing of voting laws: “We know that right now, the struggle for freedom and justice is real . . . There are more black men under correctional control today than were under slavery in 1850.” In correspondence with “Selma,” the film of which their song “Glory” was produced for, Legend makes a valid point by bringing attention to the inequalities and injustice that are still faced by African American individuals today throughout this country. The boldness of these two men to speak out about a topic as heavy as incarceration is an admirable move, especially before a predominantly white crowd.

Alejandro Gonzalez Iñarritu, recipient of Best Director and Best Picture for “Birdman” declared, “I want to dedicate this award for my fellow Mexicans, the ones who live in Mexico. I pray that we can build the government that we deserve.”

He also went on to speak about immigration reform, which, according to TIME, has made little progress despite the President’s efforts: “President Obama took action on his own, taking executive actions providing temporary legal status to millions of immigrants. Still, those actions remain contested in court and Congress isn’t likely to do much on this issue.”

The magnitude of these speeches is amplified when one considers the social and even political significance that the Academy Awards, and the film industry as a whole, have on American society. As far as I am concerned, that is something that no cheap green-card joke could water down.

It is easy to become caught up in the superficial aspects of following celebrities and movie stars. Many celebrities tend to brush off issues that hold any controversy or strongly opposing viewpoints in order to maintain a pristine image, but in having such a large audience or impact on society, it seems wasteful to use none of one’s broad spotlight to support causes that affect the greater good.

To use one’s moment on stage for such a milestone as an Oscar win is a praiseworthy act; people like Arquette, Legend and Iñarritu who use their platform to raise important issues to a visible scale are doing Hollywood fame right.