PRO/CON: Syrian Refugee Crisis: A matter of survival Syrian refugees should be integrated into the U.S. in order to escape the Syrian Civil War 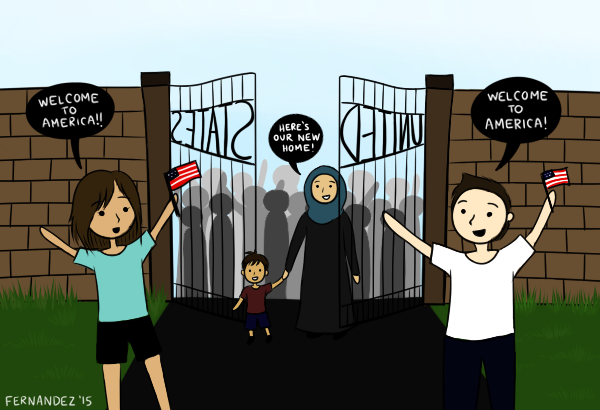 Picture this: the land you call home is in shambles, with part of the nation battling against the government in rebellion, and the government fighting back through armed forces, killing thousands. On top of all this, terrorist groups have infiltrated the country, leaving everything in chaos and destruction. You and your family are barely surviving. You cannot continue living in a constant state of hostility and turmoil.

For the locals affected by the Syrian Civil War, immigration to the U.S. is a matter of survival.

One of the greatest concerns Americans have with admitting refugees into the U.S. is a national security concern; many fear that individuals affiliated with terrorist groups may be allowed into the U.S. among the refugees. Some go as far as claiming that the refugee crisis altogether is a ploy to smoothly transfer terrorists into the country.

In Syria, innocent  people are dying everyday, in both a literal and figurative sense.

However, these people do not realize how severely the Syrian people are suffering. At this point in the Syrian Civil War, more than 200,000 Syrians have been killed, with the majority of these deaths caused by Assad’s regime and government forces in retaliation to the rebellion. Everyday, this alarmingly high death toll rises, with roughly 1,481 deaths in October 2015 alone (963 of which were caused by Syrian government forces and the use of Barrel Bombs).

To say the refugee crisis is a ploy initiated by the same terrorist groups killing innocent civilians attempting to escape is as ignorant as it is insensitive. The concern of our nation’s security is combatted through extensive background checks and an in-depth eighteen to twenty four month screening process placed on refugees entering the U.S.

Another worry expressed by those who oppose the admittance of Syrian refugees is the fear that refugees will drain society’s resources and may not benefit our country in the long-term. However, economic research shows that low-income legal immigrants (which is what the refugees would be) are a net positive to the economy in the long term, put in more than they take out, provide other benefits such as stabilizing local labor demand shocks and are more likely to be entrepreneurial so they are able to raise labor demand.

In Syria, innocent people are dying everyday, in both a literal and figurative sense. Many refugees are risking their lives simply for the chance to escape, as remaining in Syria with nothing would be more painful than dying trying to gain a better life. As a rich international superpower, the least we can do is take them in.

America has had no problem with getting involved in foreign affairs in the past on the grounds of providing for the common good. For example, the U.S. engages in conflict in Iraq and Afghanistan with the intent of “spreading democracy,” and involves itself in the conflict within Israel and Palestine. Why then, does the U.S. hesitate to help those who are clearly suffering? How does this instance differ from those of the past? This is an opportunity for the U.S. to provide for the welfare of dying civilians; the acceptance of Syrian refugees should be embraced as soon as possible.