The use and abuse of social media: a pow-wow The dangers and benefits of technology all depend on how one chooses to use it. 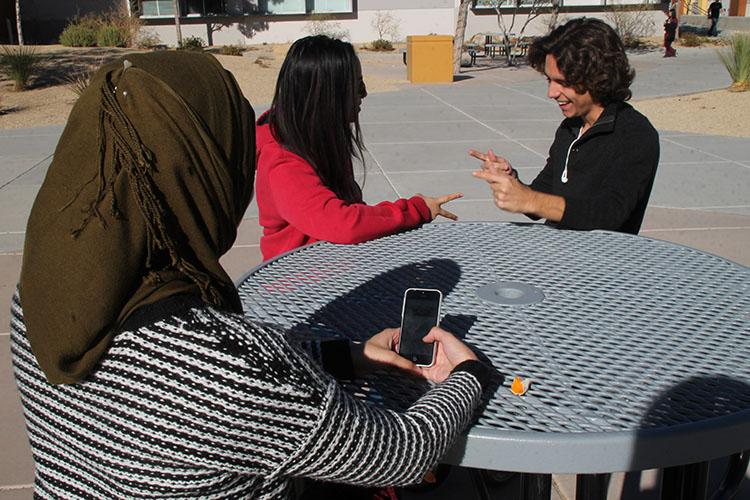 When in the presence of friends, put away your phone and engage yourself in the conversation.

You are at Walt Disney World; after standing around and waiting anxiously in line for a rollercoaster, you finally get into the cart. The ride starts, and as you’re making your way down through a loop, your screams are interrupted by none other than the sound of a cell phone ringing.

“Hello? Oh no I’m not busy…I’m just on a ride right now, what are you doing?”

The person next to you just answered their phone in the middle of the ride.

In today’s digital age, seeing crowds of individuals absorbed in their cell phones upon entering any given room is not unlikely; in fact, it is so common that it has become somewhat of a “default setting.” Rather than interacting with one another, people are completely preoccupied with their devices—iPhones practically melded to the hands of adolescents and adults alike.

The key is to find a healthy medium between the use and abuse of technology and social media; my goal is to find the perfect balance— to live in the moment more often while continuing to use the resources I have to connect with people.

But that is nothing new. You have probably read a paragraph similar to the one above hundreds of times by now, and heard someone say something along these lines: “Kids these days are socially inept! All they know is how to tweet, comment, like, and send Snapchats. Instead of talking to each other, they just take selfies!!!!”

I will be the first to admit that this generation, myself very much included, can abuse technology and get too caught up in recording every moment of our lives. We spend too much time attempting to capture what’s happening around us in order to post to social media that we forget to appreciate our surroundings, and one another.

However, those who dismiss the use of technology as the biggest problem with today’s generation (as I’ve heard it called on more than one occasion) are totally mistaken. To be dismissive of the benefits and positive aspects of social media is ignorant and outdated when regarding the current state of society.

Many argue that technology and social media are making us “antisocial,” or that communicating with people through text or tweet is not as genuine or engaging as talking to people in person. I feel that a conversation should not be deemed inauthentic or meaningless just because it is not being held face to face.

Some of the most compelling conversations I’ve had have been over text or instant message, and several of my “real life” friendships were initiated online through websites such as Twitter. In fact, by meeting individuals online, I’ve developed close friendships (some of which have been going on for five years now) with people all over the country—some of whom I have met in person and others who I have yet to meet.

In my experience, the use of social networking has had the opposite effect of making us alienated and anti-social. When people are using their phones in a public setting, it does not automatically mean they are completely disconnected from social interaction; often times, they are simply using technology to connect with other human beings.

There are, of course, positive and negative aspects to practically everything in life. Although I recognize the dangers of abusing technology, the argument that it is the root of all problems has been exhausted.

I agree that when one is in the presence of other people they should be attentive to one another and enjoy each other’s company. When you have the opportunity, look people in the eyes; establish a connection that isn’t via a screen whenever you have the chance. I tend to enjoy experiences more, such as concerts, when I am not looking at it through the mediocre quality of my phone’s camera lens.

Ultimately, the key is to find a healthy medium between the use and abuse of technology and social media; my goal is to find the perfect balance— to live in the moment more often while continuing to use the resources I have to connect with people. I believe that nothing is ever entirely black or white; it is important to explore and recognize both sides of the spectrum when it comes to the topic of technology.