“What is under your head-scarf?” 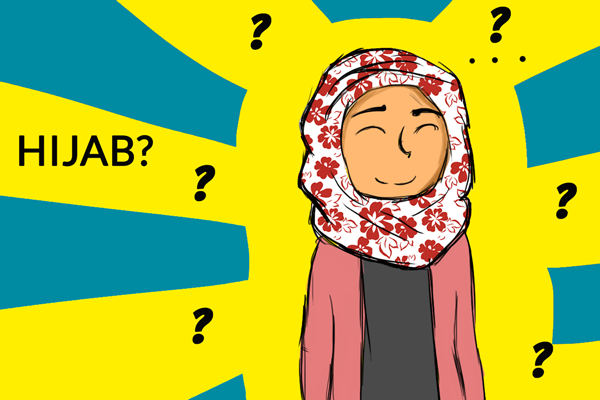 Ever wonder what it's like to wear the hijab? Photo Credit: Andrea Galvan

I was born and raised here in the U.S. ( more specifically here in Las Vegas), having a, for the most part, ordinary upbringing. However, when I decided to start wearing the hijab, or headscarf, at the age of thirteen, I have noticed a few recurring questions among my peers, or pretty much anyone that I come in contact with. Here are my favorite (and some of the most ridiculous) questions I have received.

Q: Do you have hair?

A: No, but I do have snakes similar to those of Medusa. That’s why they must be covered- if anyone looked into their eyes, they would turn to stone. You know the story.

Q: Aren’t you hot? (a frequent question during a summer)

A: Why would I possibly be hot in the middle of July in Las Vegas? It’s a desert after all; how could anyone get hot in over 100 degree weather? Additionally, the built in cooling system I keep under my hijab at all times keeps everything nice and breezy.

Q: How do you get your hair cut?

A: Well, I basically just have the barber hold up his/her scissors under my scarf and let them guess. It’s like a game! They just keep snipping away locks of hair until everything seems even.

[vision_pullquote style=”1″ align=””] Personally, I wear the hijab so that I am treated by others based on my character and moral value rather than my appearance. [/vision_pullquote]

Q: Do you shower with it on?

A: Yes. I use a special shampoo that seeps through the fabric of my hijab and simply shake my head around until the product is evenly distributed.

Q: Do you go swimming in public?

A: As appealing as it sounds to go for a casual dip in the bacteria-infested public pool waters or the glistening polluted sea in a full-on wet suit and swim cap, I am perfectly content floating around in my swimming pool at home.

Funny and cringe-inducing as some of those questions can be, there are some more honest questions that I think need some answers.

Q: Do your parents make you wear that?

A: Nope. Contrary to popular belief, wearing the hijab is completely my decision. As a matter of fact, when I made the decision to start wearing it, my parents specifically told me that they did not want me to feel like I had to wear it because of them, or for any other reason rather than my own personal beliefs and intentions.

Q: Do Muslim women have to act submissive? Are you oppressed?

A: If you spent five minutes talking to me you would probably find this question as ridiculous as I do. With the way Muslims are portrayed in the media, the hijab is often seen as an object of oppression toward women. The hijab can be perceived as limiting, but it does not restrict myself or others from being an independent, free-thinking individual.

Q: So then, why do you wear the hijab?

A: Unfortunately, with the way women are represented in society, a woman’s worth is often judged based on her appearance. Personally, I wear the hijab so that I am treated by others based on my character and moral value rather than my appearance. Wearing the hijab also acts as a way for me to feel connected to my religion.