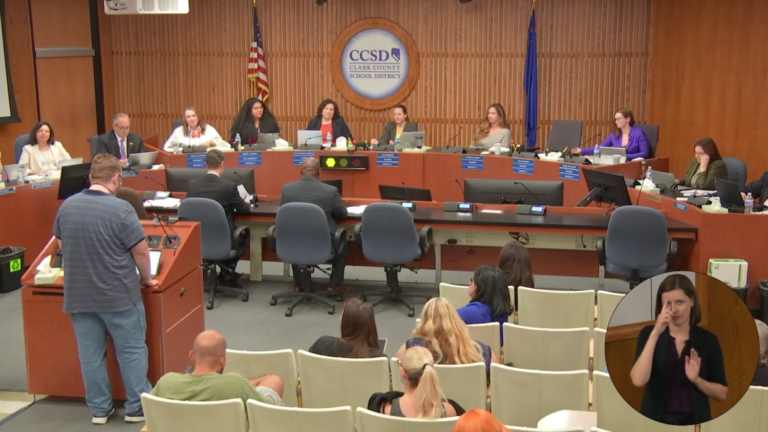 The CCSD school board engaging in a meeting over a potential anti-racism agenda. Proponents and opponents of the idea clashed, in the latest display of the country’s battles over race. Screenshot Credit: Ahmed Ahmed

America’s conversations over teaching about racism took center-stage in a Thursday school board meeting. During the regular meeting, the board was looking for input from educators and parents about the establishment of an “Anti-racism, Equity, and Inclusion Taskforce.”

More than a year after race relations captured the public eye with the murder of George Floyd, the CCSD school board proposed the idea of a 25-person task force designed to fight against racial bias and inequity.

The board meeting was chaotic, and police were called in to break verbal altercations between proponents and opponents. The chaotic atmosphere caused the task force’s advocates to argue that the school was not doing their job in disciplining opponents who repeatedly disrupted the meeting.

“Institutional racism was allowed to happen in this building,” elementary school librarian Nicole Beer said. “Today was not a good day for CCSD.”

Though the meeting’s subject was not technically on changes to curriculum, much of the public discussion was centered around CRT, or critical race theory, a theory which states that western history is best understood through the lens of racism. The theory has been the target of right-wing attacks in the past few months, and is unpopular among voters who are aware of it.

“Critical race theory does not want to recognize the contributions of Black and indigenous people of color because it works against the narrative that all systems are built on a continuum of white supremacy and all things have racism in them,” Angela Salazar, another parent who attended the meeting, said.

BREAKING: CCSD MANDATES MASKS FOR STUDENTS, STAFF WHEN INDOORS The decision follows new recommendations from the CDC that even the fully vaccinated should wear masks indoors

Racist incidents are not entirely alien to the district. In the past two years, parents have been outraged over hateful messages in Arbor View high school, and just a few months ago, a photo was circulated of a female high schooler holding up a sign mocking the killing of George Floyd.

Incidents like this have caused a rise of school curriculums that many find objectionable. These include the Oregon Department of Education endorsing the idea that “individualism” and “objectivity” are “characteristics of white supremacy,” and a California elementary school that compelled third-graders to rank themselves according to their “power and privilege.” In Clark County, a biracial student was allegedly given a failing grade in a sociology class for choosing not to link aspects of his identity with dominance and oppression. These events have built up opposition to left-wing education on race and history.

“In order to combat racism, more CCSD courses should include information about racism in the curriculum, and dedicate time towards teaching students how to identify racially motivated events throughout history and current events,” rising senior Ruth Shiferaw said.