Nevada Supreme Court: Herndon vs Fumo A battle ensues to secure a vacant seat on the state's highest court 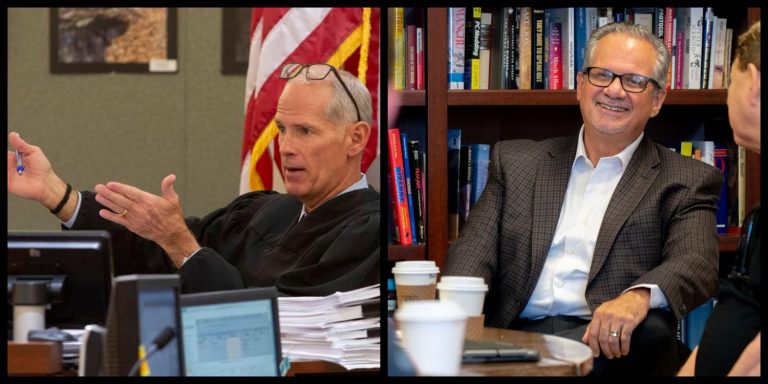 The Nevada Supreme Court is the highest law-deciding court in the state. To be a judge in this court is a complete honor, and those who are appointed must be experienced, fair, nonpartisan, and right to rule. I believe that 8th Circuit Judge Douglas Herndon can and will be this type of judge if he is elected to fill Seat D of the Nevada Supreme Court.

First, the amount of experience Judge Herndon has is astounding. He is an amazingly active judge, presiding over 275 court cases, both as an attorney and a judge. He was originally appointed in 2005 by the late former Governor of Nevada Kenny Guinn. For 15 years, he’s handled civil and criminal court cases as both an attorney and a judge. For eight years, he was also the chief judge over the court’s Criminal Division and also chief judge over the Homicide Case Team since 2017, putting violent criminals behind bars ever since he founded it. In addition, he’s spent 14 years as a criminal prosecutor and ran the District Attorney’s Special Victims Unit for seven years.

Judge Herndon has participated actively in the community and resolved several issues, such as revamping statutes involving child physical abuse and neglect, and sexual abuse against women and children. He’s volunteered in several organizations such as the “The Shade Tree Shelter” and has been an active member of the Clark County Child Death Review Team, Sexual Abuse Investigation Team, Child Protection Team, Domestic Fatality Review Team and the State Domestic Violence Task Force.

He has won several awards for his work, including the Community Service Award with The Rape Crisis Center, the Gary Collie Award for the Community Coalition for Victim’s Rights, and the Family and Child Treatment of Southern Nevada’s Man of the Year. In 2007, he was also given the honor of finally putting behind bars the infamous killer Darren Mack, who killed his wife, shot a judge, and escaped from police.

Overall, Herndon has the experience, endorsements, and achievements necessary to be a successful and fair judge. Being a judge requires you to rule based on the individual, the circumstances, and the case. None of these candidates should have a political agenda or bias. Judge Herndon is keen on keeping this court nonpartisan, and I believe that he will work tirelessly to ensure that Nevadans have the basic rights that all Americans deserve and make Nevada better.

Ozzie Fumo is the epitome of the ideal juror. The member of the state assembly has sponsored legislation tightening restrictions on leaving firearms out where children can access them. He’s also voted to increase the state minimum wage, establish a state public option and co-sponsored a bill to mandate police body cameras. Fumo has consistently prioritized the interests of poor and vulnerable Nevadans over elite special interests.

There are valid concerns about placing a legislator, a person who has a particular ideology and stated positions on issues, on the Nevada Supreme Court, which is supposed to be a neutral body. But Fumo’s credentials speak for themself-he rose from being a working-class son of immigrants to a successful lawyer.

Fumo’s opponent Doug Herndon, however, has hid evidence exonerating an innocent man he put behind bars. While Herndon’s actions here likely aren’t unique for a prosecutor, they still speak to a man who is less concerned with marginalized people in society than this opponent. And that alone is enough to justify a vote for Fumo.