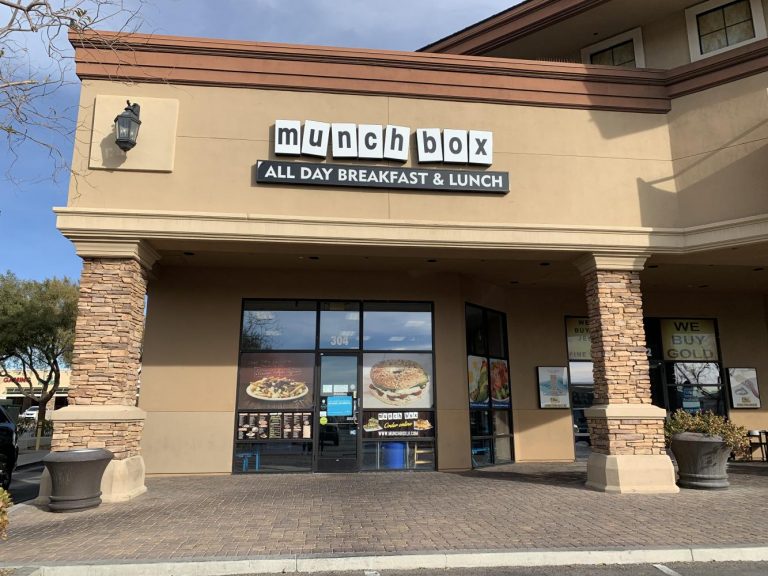 When looking for classic meals with a modern twist, Munchbox offers a simple and homey environment to enjoy your favorite foods.
Rate: B+ Photo Credit: Hannah Paine

For those looking for a quick breakfast stop, or a sit-down meal with a group of friends, Munchbox has a large assortment of food options that will appeal to a variety of cravings. After opening their first location in Henderson, these business owners decided to bring their one-of a-kind cooking to the Southwest area.

The restaurant is small and due to the current COVID-19 regulations, there are only three tables available, each spaced six feet apart. To decorate the space, the plants hanging from the ceiling match the brick walls and the metal tables accent the walls’ colors. The owners use of large windows make the restaurant appear brighter, as well as feel a little bit larger.

Customers must go to the front counter to order and pay before waiting for their food to be brought out to them. When my family and I walked in, we were welcomed with masked smiles. The staff was incredibly nice and patient, as I asked various questions regarding ingredients included on some menu items. All of the workers wore their masks correctly and explained the menu in great detail. They later brought the food out to us while we waited outside, something my family was not expecting since other people were waiting inside.

The first item my family ordered was the Munchbox Ultimate ($7.99), their signature breakfast sandwich. This sandwich includes the customer’s bread, meat and cheese choice along with fresh eggs and one hash brown. We ordered it on a croissant with bacon and American cheese. The croissant was toasted and large enough to cover everything inside, so nothing fell apart. I was interested to see how the sandwich would taste with the hash brown and was pleasantly surprised that the texture blended nicely with the fluffy eggs and crisp bacon. There wasn’t an overpowering seasoning on the hash brown, so it didn’t make much of a difference to the overall taste. Customers also have the option to add a side and drink to their meal by making it a combo for an extra $2.50.

The next item that we ordered was the Healthy Burrito ($8.99), but we turned it into a “scrambowl.’” The “scrambowl” is an option to take any burrito and make it a scramble without the tortilla, which is basically scrambled egg whites with diced vegetables mixed in. This bowl came with onions, mushrooms, spinach, avocado and swiss cheese. In most situations, depending on how egg whites are cooked, they can release a lot of liquid. Since there was no tortilla to absorb the juices, the scramble was left to sit in it. This gave the eggs a strange, moist texture that wasn’t pleasant. The vegetables had a consistent size, however the onions were quite large and the mushrooms were rather pungent. The vegetables also added moisture, and since the cheese was melted on top and not mixed in, it didn’t create a chewy consistency. We were expecting the portion to be a little larger, yet it was still a flavorful dish.

The last thing we ordered was the Philly Bowl ($12.99), which is a healthier, more filling version of their Philly Cheesesteak. It included onions, mushrooms, green pepper, cherry pepper, provolone cheese and egg whites. This bowl was the perfect option if you are craving both breakfast and lunch foods. The dish consists of a signature Philly cheesesteak mixed with egg whites to create a perfect scramble. Because the vegetables were cut along with the steak, they were evenly dispersed throughout the egg whites. The thinly sliced and chopped vegetables really made it seem like you were eating a Philly cheesesteak without the bread. The vegetables didn’t have a sour flavor and were well seasoned. The bowl was very filling and the portion was quite large for the price paid.

This restaurant may be very similar to other places in the area, but the ability to pick either breakfast or lunch helps it stand out from the rest. The staff had amazing customer service and followed all of Nevada’s mandated COVID-19 regulations. Along with the welcoming staff, the appetizing food contributes to the many reasons why Munchbox is an excellent choice for breakfast or lunch.