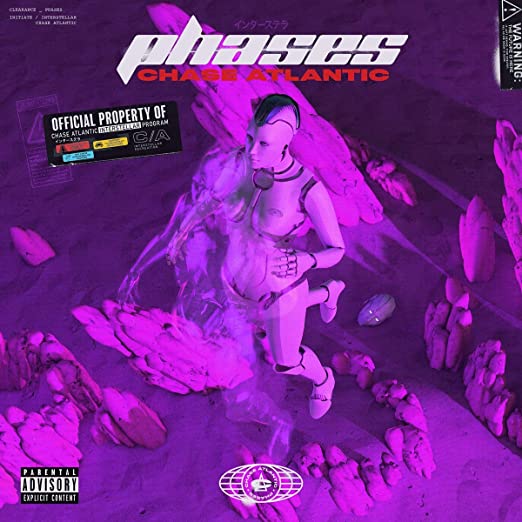 Chase Atlantic releases a new album ‘PHASES’ with twelve tracks revolving around love and bettering oneself with a sombre and alternative R&B beat.
Rating: A Photo Credit: BMG Rights Management

Listening to the last track of the deep-rooted new album, “I DON’T LIKE DARKNESS,” Mitchel Cave sings, “Hard to keep a friend, I guess I’m cautious / Hide the pain inside, I don’t endorse it.” This song genuinely is able to portray how I felt during a certain time period of my life and through this track, I discovered Chase Atlantic’s new album, ‘PHASES.’

Originally from Australia, the boy band consists of the lead singer, Mitchel Cave, his brother Clinton Cave and Christian Anthony who focuses on songwriting, but sings as well. They formed their band in early 2011 and hit it off with their viral single, “Friends,” which discusses the topic of manipulative relationships and sets the theme of their style of music. Due to the single, they were able to sign to the Warner Music Group which allowed them to tour and release new albums.

‘PHASES’ starts off with a peaceful yet engaging instrumental intro which is the foundation for the rest of the songs and leads into the first track, “ANGELS.” This song represents someone who feels alone, and needs someone to talk too. During the pre-chorus of their sixth track “NO RAINBOWS,” Anthony and Cave sing, “Your friends won’t stay close / just waste time,” telling the band’s personal story of how they’ve dealt and struggled with being alone, relating back to “ANGELS.” Both of the songs are quite meaningful and catchy due to the unmissable saxophone and electronic instrumentals.

Not too long into the album, they dive into the topic of substance abuse and mental health with the third track “PHASES” and the more widely known song, “STUCKINMYBRAIN.” “STUCKINMYBRAIN” and “PHASES” describe the story of someone trying their best to get rid of a drug addiction. In “STUCKINMYBRAIN,” the bridge, “See I would give my soul away not to feel this / Struggle with it every day, it’s like an illness,” describing how badly drugs can affect a person’s mental state. During “PHASES,” Anthony and Mitchel Cave sing, “I’m falling apart, I know it’s denial / I’m going through phases,” depicting a person struggling, but overall trying to better themselves.

Moving from mental health to relationships, “LOVE IS (NOT) EASY,”, symbolizes a mother warning her child of the dangers and difficulties loving someone can withhold.  During the chorus, Mitchel Cave sings, “She said, ‘Boy, love isn’t easy, it’s hard / Boy, see everyone leaves and your heart breaks,” depicting the harsh reality of how heartbreaking it can be to love someone. Similarly, towards the end of the album, “I NEVER EXISTED,” Cave vulnerably shares his experience with a woman who was lying, displaying the heartbreak and commitment issues he felt with a somber beat.

Staying on the topic of love, the fifth and most popular song “HER,”sticks to a more alternative R&B beat. During the chorus, Mitchel Cave sings, “But boy, don’t go falling in love / You can’t stay with me / All you’ll ever have is one day with me.” These lyrics represent the hardships a person can face when they are in love with someone who cannot be loved, correlating the similar idea throughout the album.

‘PHASES,” showcases the group’s talent, displaying their voices and realistic experiences. They incorporate the many realities people face today with substance abuse and heartbreak. This album is a good alternative to listen to with R&B beats, but also melodic and sentimental sounds as well.