Enter an ethereal frenzy with ‘Girl Eats Sun’ Compelling the listener with enticing Spanish strings, artist Hope Tala manages to blend in her culture with music 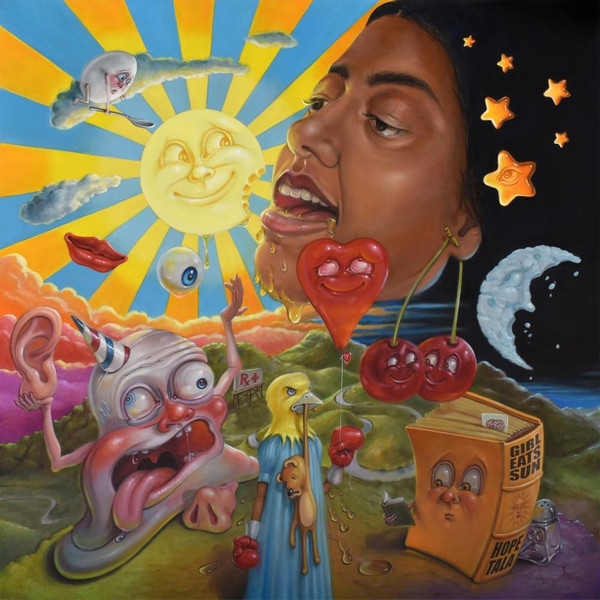 Originally from West London, Hope Tala is taking over Britain’s music industry with her Latin and Bossa Nova influenced silky, psychedelic voice. Young and promising, Tala recently graduated from the University of Bristol, majoring in English Literature – all while producing her first EP, “Starry Ache.” Threading inspiration from writers such as Shakespeare into her lyrics, Tala expressed her wish in an interview with Vogue: to make a dreamy escape for hopeless romantics through the inescapable use of figurative literature.

Diving into her serene, poetic universe, her first track featuring Sky, “Mulholland,” has a catchy, yet sombre beat oftenly heard throughout the album and the lyrics, “They wouldn’t leave me lost like you do / No one could love me like you do,” illustrating the empty, black void she feels without her lost love. One of the key factors that make Tala unique is the incorporation of the Spanish guitar in her songs “Mulholland,” “All My Girls Like To Fight,” and “Cherries” which represent her true passion for combining modern day music to her roots.

Inspired by the biblical Garden of Eden, “Cherries,” the second track featuring Amine, showcases her inexhaustible and airy vocals. Tala sings, “Don’t leave me here alone,” and her voice control mixed with the melancholic sounds and the ethereal vibe of emotional and physical intimacy, makes this song a hit. Along with “Cherries,” one of the strongest tracks is “All My Girls Like To Fight.” This track, similar to “Cherries,” has a fast-paced bossa nova rhythm with a somewhat added classical touch to put the listener in a suspenseful trance. On the track, Tala sings, “Looks in your eyes when she strikes it’s an art,” as a way to empower women and create a tale of independence with the background music enticing drama.

Moving on to her fifth song, “Crazy,” is a catchy and meaningful track elucidating the craziness of falling for someone and depicting a story of good times. Starting off the song by singing, “You don’t need to pretend, know you want to be friends with me,” sets the tone, with the added background beat drop a minute in, creating the perfect ambiance.

Similarly, “Drugstore” and “Easy To Love Me,” portray a resembling theme of romance, but with the love being heavily complicated.In “Easy To Love Me,” Tala uses her entrancing voice, singing, “I wish I was braver than she / Wish I could be all you need / And that I could make you leave her,” delivering the message of a true heartbreak.

Although love and heartbreak are generally overused themes for songs, Tala’s distinctive use of metaphors and the incorporation of a mix of Bossa Nova and Soul makes her stand out and attune to her listeners. Her airy voice and music has a familiar resemblance to artists like Billie Eilish and Kali Uchis, so if you are in the mood to descend to another dimension through sombre beats and figurative lyrics, add “Girl Eats Sun” to your playlist.