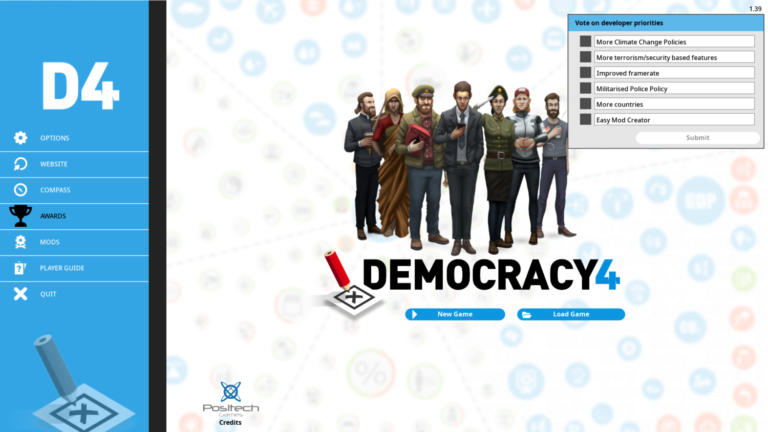 “Democracy 4” is a massive improvement over its predecessor, truly a worthy sequel.
Rating:A+Image Credit: Photo Courtesy of Positech Games

The “Democracy” series by Positech Games is a long-running political simulation franchise focused on being the leader of one of many real-world nations. The player manages every aspect from taxes to foreign policy. Many had high hopes for “Democracy 4” and it does not fail to deliver.

“Democracy 4” expands and improves on every system present in “Democracy 3,” as well as adding a wide range of new mechanisms to simulate power. These updates also come with an overhaul to the game’s interface and graphics, giving the game a familiar, but improved feeling.

This game is at its best when players have to make choices, not based on how they feel, but for what will keep them in power. The only way to win this game is to keep going because there is no actual win screen. The game only ends when a player is assassinated or voted out of office. This, in a dark twist of the political genre, means there is only one real end goal: staying in power forever.

This is the core of the game and what made me fall in love with this entry into the democracy series. This ties into the game’s new feature “political power,” a value that goes up and down based on how much freedom and democracy are present in your nation. This means the only way to keep the game going is to strip away at the democracy present at your nation’s start. This is a beautiful way to simulate the corrupting nature of absolute power, and can actually make the player take away a significant message from a relatively simple game.

As I logged hours playing the game, I began to notice more detail that had been added to the game since its predecessor. While still being simplistic with its interface, there is an addition to the playability of the game. The graphical design is solid with the political nature of the game, making you feel as if you are being given information by actual advisors, rather than just reading numbers off of a screen.

The only major negative issue I have with the game is the lack of an end-game screen and good soundtrack. While I do believe that forcing the player to stay in power for as long as possible, no matter the cost, is a great lesson and narrative tool, I still believe that there should be some endpoint or a variety of endings that the player could achieve. There is also a noticeable lack of an engaging soundtrack. The instrumental music is fine, but lacks quality, something that makes the game harder to immerse yourself in.

When first buying “Democracy 4” I was skeptical of the concept of the game, a still early access sequel to “Democracy 3.” I was sure that the game was just going to be a slight improvement, but a clone of its predecessor. To my surprise, the game has a unique twist, new mechanics and a myriad of improvements. “Democracy 4,” even in early access, is definitely worth the $26.99 price tag on steam.