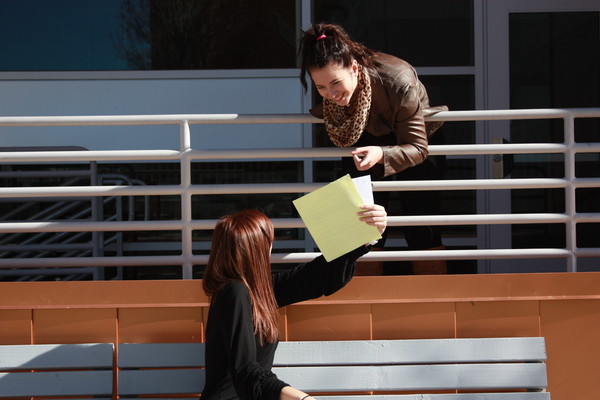 Sometimes something as simple as sharing a document can bring a friendship spark back.
Photo Credit: June Gabriel Santos

In light of a new year, one thing I would really like to do is to rekindle the friendships that I neglected. However, I am not quite sure where I stand in this matter.

I know of many friends that have either replaced me or have just lost interest in how close we once were. I miss being with my friends all day at school, and then hanging out after the last bell rings. I miss our laughs and giggles, but most of all, I miss how carefree we were. No boyfriends, no girlfriends, but instead just a group of close friends sharing secrets and comforting each other.

This year, it seems as if everything became so utterly complicated; most of my old friends have “soulmates,” some of them believe that going out is more important than friendships, and many of us simply drifted from each other for some reason or another; but yet we still believe that these friendships are worth something, which is why our second nature is to try to fix our flawed relationships.

Additionally, ways that many people try to rekindle friendships starts from a simple phone call, to going out to the movies or going shopping. But, as mentioned before, the “rekindling” part of this concept is difficult to achieve, due to people not finding that friendship “spark.” Often times, friendships are almost impossible to repair.

The fact that there are older people always saying “I’ve known them since elementary school” is frightening, due to the fact that I lose friends in the course of six short months. No matter how much it would be great to rekindle these companionships, I’m afraid that it is impossible. I have always considered the fact that a friendship takes effort.

Also, breakups and the end of a friendship are significantly similar. In the course of six months, I have “broken up” with numerous important people. It is so difficult to try to rekindle friendships, when my old friends do not even put in effort anymore. Something that once was the promise of friendship forever is now as distant as ever.

High school is a plethora of milestones and learning experiences; some difficult and emotional, and others simple and humorous. The way the lessons are chosen to be learned is up to the respective person, and friendships along with their flaws are lessons we will hold on to for life.