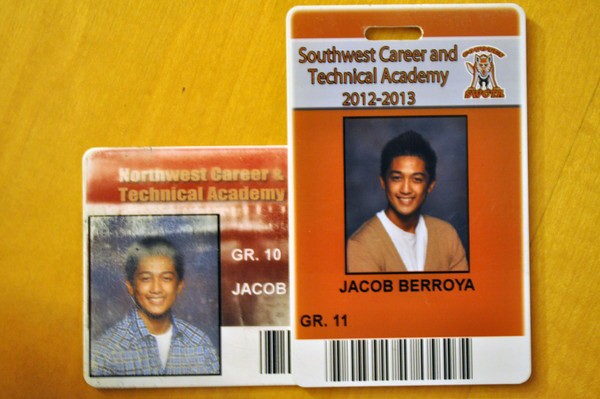 Transitioning from one school to another is a two-way-street, whether it is as simple as switching to a school nearby, or for someone like me, leaving your childhood friends and moving to a new neighborhood. Having to start a whole new life on the other side of town is something that I dreaded and my life was about to change completely.

My transition from NWCTA to SWCTA did not start off as smooth as I thought. Growing up in Centennial Hills, I was not close to anyone on a personal level at SWCTA. As soon as I entered the door’s of Southwest CTA, I was greeted with short glances and unfamiliar faces. It was as if I entered the atmosphere of an entirely new planet where I spoke a completely different language than everyone else. I knew from the very beginning that it was going to be a long fourth quarter.

Being the judgmental person that I am, I started to see various styles that were abnormal, faces that were unfamiliar, and personalities of the students at SWCTA that I did not like.. My first judgment was that I was going to loathe being here. The schools were completely different. For example, the students were divided into the Design Academy and the Professional Academy and confused me. I wondered why we were split from one another, but soon I found that it was because of our program areas.

Only as weeks went by did I find my stay to be growing rather pleasant. Instead of immediately denying everything I wasn’t used to, I opened myself to others and soon found common interests with other people, such as dancing and music. Although it was a hard concept to grasp, I found that SWCTA and NWCTA were not so different after all. The only difference from the two schools was my initial judgment.

My life after the move hasn’t changed much. I still spend time with friends, obtain good grades, and even go back to Centennial Hills to hang out with some of my old friends. Sure, I go through the regular relationship problems, stress, and family problems like most teenagers do, but I cannot say that my life is completely different because of my new school. I have found close friends, relatable teachers, and new interests ever since my transition. All in all, my new life here at SWCTA will be a challenge, but it is a challenge that I won’t have to go through alone.