Body Modifications vs. The Workplace Unprofessional, or considerable social norm? 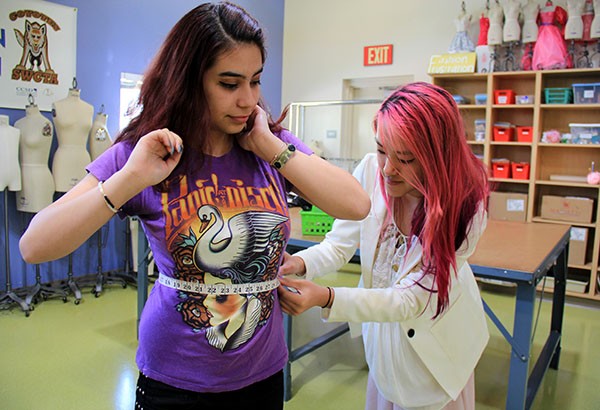 Senior Huilin Chen remains professional in her work environment, despite having fuchsia hair and facial piercings.

Edward Rangel, a server at a Red Robin restaurant, was shown no tolerance for getting tattoos on both his wrists. Despite having worked at the company for over six months with no discrepancies regarding customers, fellow employees, and supervisors, he was blatantly fired as a result of his newly inked wrists. As body modifications (e.g. tattoos, body piercings, artificial hair color, etc.) have become more common, the issue of discrimination toward people who possess them in the workplace has become a greater issue in need of being addressed.

Today, businesses are not allowed to discriminate against employees for certain attributes. Several laws have been passed in order to prevent discrimination in the workplace from occurring, such as the Civil Rights Act of 1964, which prohibits employment victimization based on race, color, religion, gender, or national origin. However, a group that tends to be overlooked in terms of the law are people who have body modifications.

According to a Pew Research poll, 24 percent of Americans are tattooed. As for body piercings, 1 in 7 people have body piercings located in areas beside their ears. However, a common stereotype that continues to surround body modifications is that those who possess them are criminals or gang members.

[vision_pullquote style=”1″ align=””] Outside appearance should not be a detrimental factor of whether or not someone is hired for a job; the color of one’s hair or the ink on their skin is irrelevant to how qualified they are for an occupation. [/vision_pullquote]

Although obtaining body modifications has become common among Americans, many businesses still discriminate against those who have them, or force employees to cover up their tattoos or remove their piercings while at work. Starbucks and Wal-Mart are two examples of companies that prohibit visible tattoos or piercings for workers. Following a company’s dress code policy is required protocol in the workplace, but telling employees they must take special measures, such as covering up tattoos with heavy makeup or clothing regardless of the weather, seems excessive and unfair.

Outside appearance should not be a detrimental factor of whether or not someone is hired for a job; the color of one’s hair or the ink on their skin is irrelevant to how qualified they are for an occupation. How is judging one’s suitability for a job position based on the stereotypes surrounding their “outlandish” appearance any different from judging someone based on their ethnicity?

Prejudice toward people with body modifications can be found outside of the workplace as well. Many people seem to think that because a part of someone’s appearance may not be seen as “normal,” such as having a vibrant, artificial hair color, they are entitled to remark or state their criticism on it.

As someone who is subjected to questioning from random strangers due to my choice to wear the hijab, I can imagine the annoyance of someone with body modifications. They may deal with the same kind of condescendingly asked questions that they wouldn’t dare ask someone with a more traditional appearance.

For myself, an example would be: “This is America. You know you don’t have to wear that, right?” while a person with body modifications might be asked: “Why would do you that to yourself?” In the line at airport security, both myself and a modified individual would be treated in a similarly extra cautious manner than others would be, with the likely chance of being pulled aside for “random questioning” due to stereotypes that imply that we may be seen as “suspect.”

Tattoos can especially hold significance in one’s culture, religion, and views, or could be used to commemorate a loved one or mark special occasions. Tattoos hold meaning to those who acquire them, whether it be a reminder for oneself to live every day to their best potential or simply loving an image to the extent of wanting to see it on their body.

Appearance is a form of self expression, whether it be the way someone dresses or having a sleeve of tattoos. Why should one form of self-expression be treated differently than the other and limit one’s ability of acquiring a job? Just as it is unfair to jump to conclusions about someone based on their ethnicity, it is unfair to judge people based on the way they have chosen to look.